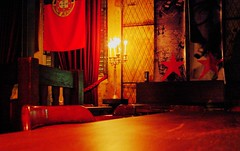 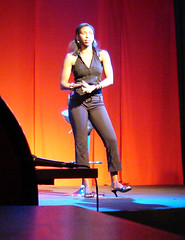 Frieda Karipi in the Vagina Monologues 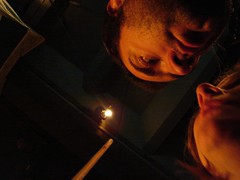 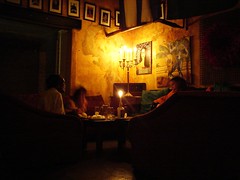 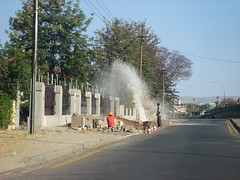 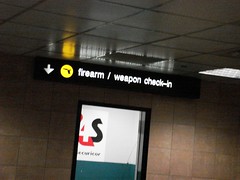 After a very busy week, where a lot of time was spent on Soweto uprisings . com, we finally head for Namibian soil. The website is still not completely finished, but that's mostly because there still is too much content missing. Most, if not all, of the functionality is there.
As a result, Ismail and I did a presentation of our work on Friday, at the offices of ASM in down town Jo'burg, Ismail's employer. It must have been quite successful, as the scheduled 15 minute presentation ended up being a 90 minute discussion. Now, it's mostly up to Ismail to get all the content in, but not before he finishes his report on the project, in time for a presentation in Cape Town, somewhere in the coming week.

On Wednesday, we visited the opening of an exhibition at The Bag Factory, where Ismail's girlfriend works. One of the two 'artists in residence' on display was Arash Hanaei, an Iranian on a three month visit to South Africa.

On Thursday, we attended yet another function. Vlisco, a Dutch garment producer, insanely popular, mostly in western Africa, presented their designer brand collection in their tiny store in the Mall of Rosebank. Not really my cup of tea, but, hey, free food and drinks.

And Friday saw us heading to Pretoria, for a dinner of Bobotie, pumpkin pancakes and mulva pudding. Bobotie, not too dissimilar to a typical American meatloaf, is very much a South African dish. In fact, it's so South African, most restaurants don't even offer it, because, hey, you can eat it at home all the time.

And now we're off to Namibia; Dessert, sea and Suessichkeiten.
Namibia was, until 1918, one of the few German colonies in Africa and the only one on which they left a mark with, supposedly, lots of art nouveau architecture, central European love for sweets and good German beer.
Namibia is also very much known for the Skeleton Coast, where many ships, overcome by the bad weather off the coast, ended up stranded. Probably Namibia's most well known tourist attraction at the impressive red dunes.

Interestingly, because Namibia, Botswana, Lesotho, Swaziland and South Africa are part of the same customs union, you're not allowed to buy tobacco (and I'm sure alcoholic beverages too) at the tax free area of the airport in Jo'burg.
The flight itself, with budget airline Kulula wasn't all that bad. Because this connection is actually services by a BA plane, and part of the BA network, you actually do get drinks and food on board.

Windhoek is one of the most mellow, if not sleepy, capitals I've ever seen. At least on a Saturday afternoon. All the shops are closed and the streets are empty of cars and people. Also, people, be it black, white or coloured, appear to be friendly, helpful and open. Something that you only experience in South Africa when indoors and, generally, stick to your own side of the racial divide.
In fact, the country appears to be much more racially mixed than South Africa, although you wouldn't be able to tell this from population statistics. But, clearly, people feel much more at ease with each other, here, than they do in South Africa and this might be a result of the prominent role the Basters played, a word indeed derived from the Dutch for 'crossbreed', coloureds from the South African cape who moved up north to settle, during the German occupation of South West Africa (as Namibia was known at the time).
Interestingly, while they escaped racial profiling in the South African cape, they considered themselves more Boer, voortrekkers, than black, as can be seen on the rather awkward photographs in the Alte Feste museum in Windhoek, where, all dressed in their Sunday best, they'd not be out of place, except for their darker skin, in some rural Dutch village during the 19th century.

We arrived in Windhoek at the beginning of two concurrent arts festivals, The Bank Windhoek Arts Festival and the /AE//Gams Arts Festival. And no, the forward slashes are not the result of some obscure filing system on behalf of the organizer, they are actually clicks (letters).
Many of the performers appear to come from South Africa, although several do seem to come from Namibia. The show we're seeing tonight is very affordable. A good thing since the price, 35 Namibian Dollars, or about 3.50 euros, is probably the maximum I would ever consider paying for a showing of The Vagina Monologues.
Well, until I saw the show. It's a bore, even though the local flavour that was given to it is mildly entertaining.

It's surprising that a country significantly larger than France but with less than 2 million people can actually support two concurrent arts festivals. It makes you wonder how they can get the venues filled.

Sampa Kangwa Wilkie and Frieda Karipi, who seemingly also plays a part in Survivor Africa, act reasonably well and it's nice to see the show was given a local flavour, but as a whole, it's just too much of a bore. It has to be said that the Namibian, mostly white, crowd appeared ecstatic and this 'liberation of the vagina' might work in prudish societies such as the USA and, possibly, Namibia, to me it feels like we got over this by the time the 1980s showed up.

I did appreciate a recent addition to this 10(!) year old show, where the journalist (Zoe Williams) is mentioned who tries to reclaim the word 'cunt'.

Then, ignorance was showing when, twice, the war in Afghanistan was compared to the wars in the DRC and Kosovo, where the rape of women was an integral part of those wars of terror. And absurdity was thrown in the mix when it was claimed that some 100 million girls have had their genitals mutilated. Although Amnesty appears to mention that it's actually 130 million girls and women. To me, this sounds absurd, as these 'operations' are practically only done in parts of Africa. With a population of some 400 million women, this means that about 1 in 3 African women had their genitals mutilated. This simply doesn't wash if you compare the spread of FGM in Africa with the list of population sizes for African countries.