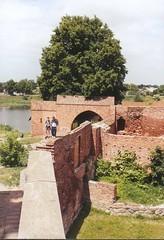 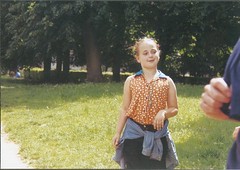 Too young to be a babe 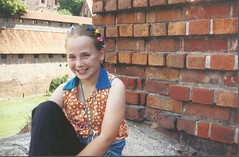 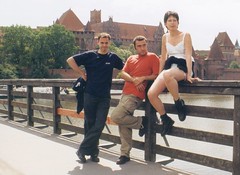 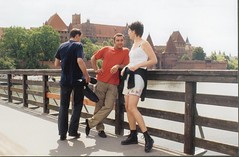 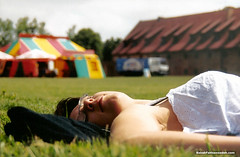 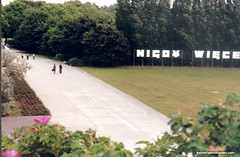 The next day we were off to Malbork, sight of one of the biggest, if not the biggest, mediaeval castle in Europe. Indeed, its HUGE. The only drawback being that if you want to get inside, you have no choice but to partake in a three hour tour of the area. I mean, a tour is nice, an obligatory tour is less nice. But an obligatory three hour tour is an assault! We skipped the tour, walked around the very impressive castle and moved on.

Driving to Warsaw, we almost had an accident. Some might say nothing of a surprise, considering my driving style. I say it wasn't my fault. But then, nothing happened anyway.
At some point, we came across a road block where one side of the road was under repair and the other side was used, in turns, by traffic going in both directions. After waiting some 10 minutes for our turn to cross, we were allowed to move. I drove behind two very slow buggers and when the end of the roadwork was in sight I started accelerating. The cars in front me did the same, but at some point the car directly in front me slowed down its acceleration, suddenly braking as well. Not a good thing, me stepping on the brakes, sliding away and almost crashing into the car in front of us. Of course it was his fault!

Although the roads were much less then perfect, we still made it to Warsaw quite in time. I had put us in quite a difficult position, since we were to meet two friends of mine in Warsaw on the same evening. One, as I had learned earlier in the day, even was expecting us for dinner (which turned out to be VERY good, we grilled the night away, although it was a little bit heavy on the meat side).
We came in relatively early, spent some time at Warsaw's most famous cafe, cafe Blikle, with the first friend, Kuba, and then raced of to the second, Robert, to fill our rumbling tummies.
Kuba I had met on a train from Warsaw to Berlin, when traveling through from Vilnius to Rotterdam in January. Robert, an older friend of mine, I hadn't seen in a year. His wife even longer. Seeing them again really made my day and their hospitality was almost too much to handle. It was big fun. Funny to also meet Robert's parents, who were in for the weekend, traveling with a mini van, going by the name of 'bug' (Zuk in Polish).
When, at twelve or so, everyone went to bed, I convinced Robert in enjoying a night cap with me. 'Allright', he said, 'but only if we do it my way…' No choice but having to agree, we drank a night cap. A big waterglass full of Vodka-orange. 5/6th Vodka, the rest air and a drop of orange. And we drank two of those glasses! When we finally stumbled off to bed, I could hardly walk.

One thing I had been looking forward to, the whole trip, was visiting the Russian market. Situated around an old, but still in use, stadium, you used to be able to buy anything there. Guns, drugs and even stuff like Tanks and worse.
Over the last couple of years, the market become much more 'regular', but its still a good place to buy cheap CDs. Remembering what good time I had buying cheap CDs when I was in Russia, I bought another twelve, before going on a sightseeing tour with Robert and the rest of the gang.