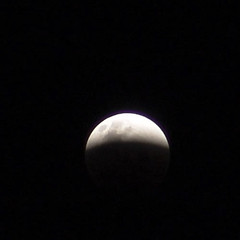 We had a perfectly clear sky during the lunar eclipse, so there was a lot to see. A pity it was so cold: I had to wear a sweater.

At work, the network is being finalized. Two weeks ago, on a Friday, I was told the proposal for getting a network had to go past the tender board. Then, on the next Monday, the proposal suddenly didn’t have to go past the tender board and on Tuesday, a contractor had started building on the network. They said they’d be finished this week, but they’ll at least need one more week.

Related:  Cosplay
This text is available under a cc-nc-a license.