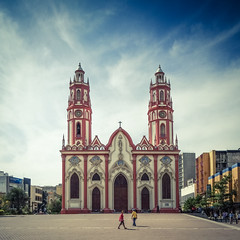 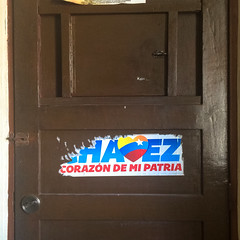 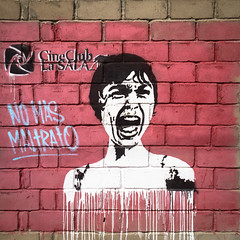 Barranquilla doesn't get much tourist love. Yet, it's currently one of the only two cities Inselair, the national airline of the Curacao, flies to in Colombia. Barranquilla is the fourth largest town in a country of 45 million and is an industrial hub, right on the Caribbean coast.

Where the 10 hour flight from Amsterdam to Curacao cost me a mere 300 euros, the cheapest, and only way to get from Curacao to the South American mainland is to fly to Colombia. A 60 minute flight at a painful 175 USD. But, adding insult to injury, I had to pay an on-the-spot airport tax of 39 USD.
Thankfully, Colombia, specifically Barranquilla, not catering to the tourist dollar, is pleasantly cheap.

After arriving at my hotel, I strolled around town, ending up on a sizable square, fronted by a largish curvaceous and modern church with inverted pyramidal purple stained glass windows. On the square, some 5 or 6 groups, ranging from 15 to some 50 people, were practicing their upcoming carnival parades, complete with marry bands setting the rhythm and style. Spectators numbered in the hundreds.
In one corner, a dozen or so male couples were cuddling.
Barranquilla hosts one of the biggest carnivals in the world.

On the way back, I stopped at one of the overly brightly lit bars that double as mini markets. for a beer. The television was showing a Latin American soap opera and several aged couples were engrossed in the unfolding drama. When the episode ended, the TV was shut off and loud samba music was put on. As if on queue, several all-male parties walked in and ordered copious amounts of beer, arguing even louder to be heard above the salsa rhythms.
The fascination for the soapies is widespread. Streetside burger joints have a television out in the open were passersby can get their fill.

Elsewhere in town, the museum of the Caribbean almost gets its use of QR codes exactly right. There's a free and open WiFi network at the museum, giving access to a local network; virtually all the exhibits, explanations of which are in Spanish only, have a QR code next to them which points to an address on the local network, where the same information, very well presented, is available in English, the online information comes complete with audio guide; and it's free.
But, a few of the QR codes are incorrectly placed, randomly around some of the rooms, and some just don't work. They also don't list the URL each code is supposed to point to, so, in case that reading the code fails, or you don't have a QR code reader, you can't enter the URL in your browser yourself.

But, the museum is worth a visit, highlighting the many different peoples and cultures that make up Colombia and, by extension, parts of the Caribbean.
Many of the displays have an innovative multimedia aspect to them, though it also seems that some were done on too low a budget, not being in the best of states.
The ground floor has a lovely multi-video life-size display on Colombian music. About a dozen or so projectors show life-size images of individuals, part of a large musical ensemble performing a range of Colombian musical genres, influenced by indigenous, African, Spanish and, in relation to the two islands that are Colombian and in the heart of the Caribbean, English styles.
But, besides the show being entertaining and impressive, it also had a bit of a creepiness to it. The life size video projections, with the human figures the only thing showing against a black background, the feeling I could not shake was a certain post-apocalyptic vision of a time capsule triggered by arrival of humanoids in a far of future, stumbling upon a cave built with the specific intention of preserving human culture long after civilization was ground to dust.