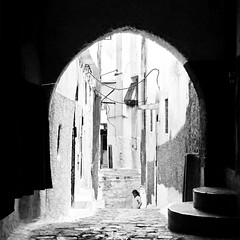 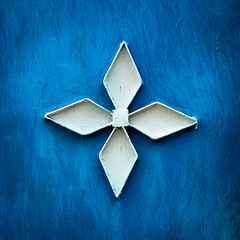 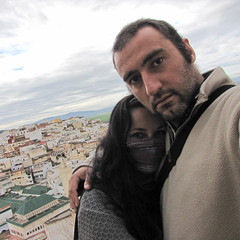 Babak just caught himself and his girlfriend on camera, mere seconds before she swapped her identity to stealth ninja 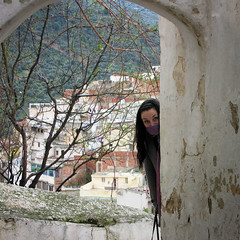 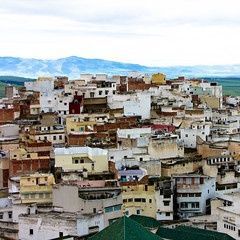 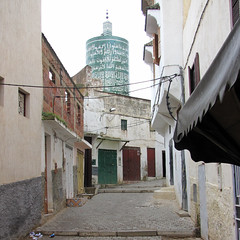 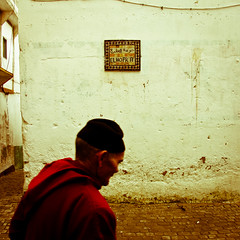 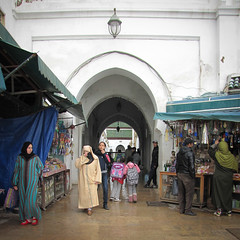 Being chased out of Saudi Arabia, Moulay Idriss, the great grandchild of Hasan, son of Ali, the cousin of the Prophet, settled in what is now Morocco, managing to convert the locals to this newfangled religion called Islam. He promptly became their leader and kicked off Muslim dominance in the region for the next 1000 years.
Starting out as what are the Roman ruins of Volubilis, he decided a more grandiose capital was in order, and had work started on Meknes, one of the country's four imperial cities, Idriss himself the founder of morocco's first royal dynasty.

Unfortunately for us, the weather didn't cooperate with our visit, and we decided to forego a visit to Volubilis itself, sticking to the town.

In the evening, we had the fortune of, for the first time, tasting a Moroccan wine. Apparently the region around Meknes is the country's primary source of good wines. We had dinner at pizzeria le four, where the menu claimed that 14% tax was not included, though we also didn't get it charged. The pizzas and salad weren't too bad, and the wine, though rather young, was pleasantly refreshing.

The next day, waiting for our train to Fez, having breakfast, a bunch of kids were hanging around the train station, slightly zoned out, sniffing what might have been glue and, ages 8 and up, puffing away on cigarettes.

Related:  A head in Ulan Ude
This text is available under a cc-nc-a license.