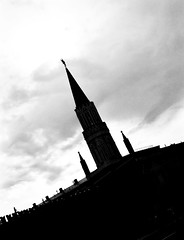 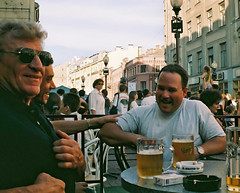 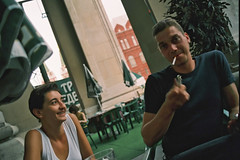 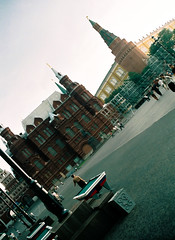 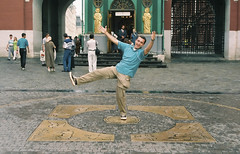 Exactly in the center of Moscow 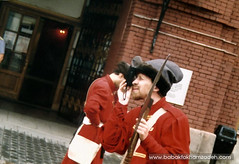 I said farewell to my two room-mates and stepped out of the train, relatively early, around 9am or so. It was even sunnier then when I arrived in Minsk, but I figured the bad weather would catch up with me again anyway, just as it had in Minsk. I didn't have any Russian Rubles, so the first objective was to change some dollars. Luckily, there was an official change office at the Belorus train station, where I had arrived. Unlucky for me, although I only found out later, they also ripped me off. Giving me only some 75% of the official exchange rate. Still, I could get myself some bread, cheese and water and as I was munching away, I discovered that my mobile phone was working again. I called Mark (the Belgian guy I met at the Russian embassy in Brussels) to ask whether he still had a bed left for me. He had, and he was going to pick me up too! I couldn't be happier. While waiting, locals where already asking me for directions. In Russian. Apparently, I blended in perfectly.

Turns out, Mark is living in an unbearably big apartment, less then a ten minutes walk from Red Square. The apartment totals three floors. He's living together with his wife, Anya, an Armenian by birth and his mother in law. Anya speaks Russian and Dutch, his mother in law speaks Russian. She used to be a major Artist during the communist regime and she's the one that a nice picture. For free, as she kept on insisting (while Mark kept on insisting that, as far as he cared, I could throw away the picture immediately after receiving it). How everything really is structured in that family, remained unclear during my whole visit there, but his father in law is still alive, being both an opera singer and photographer. He had married his mum in law several times, after a divorce and a fuck-spree around the country. The house used to be owned by his in-laws too, but somehow, its now registered under his name. He also has a kid running around in the apartment and it turns out he used to be married before, in Belgium. Also having a kid from that marriage, he has no contact with either his ex-wife or his other child. Still, he does like Pink Floyd, so he can't be all bad.

Mark started out as a truck driver, having to drive deep into the former Soviet Union on a large number of occasions, moving everything from cigarettes to furniture, including transporting the occasional illegal shipment of drugs or weapons. Eventually, he ended up in the business of moving people from place to place and had just recently started working for a company called Crown.
He was about to get a computer and email address and he would let me know his email address as soon as he would get it. I'm still waiting…

There was talk of him moving to the new Crown office in St. Petersburg (there's even a story about that office on the Crown site, but last I heard, he was still living in Moscow, although he had managed to get Anya in the company as well. Surprisingly, for someone living in Russia for close to ten years and still living there, Marc had a very negative view on Russia and Russians but kept on living there.

Mark isn't your most average, run of the mill guy. When I met him, he told me he had broken a bone in his hand some days before, by smashing his fist into 'something' out of anger. His boss agreed on him going to the doctor (and Crown paying for it, not a bad deal, at an average price for a doctor's consult of around $200), but Mark didn't want no-one to touch (that is, operate) on his hand. No pills or shots either. It would just have to heal by itself.

At least in one way they are typically an expat couple. They are in no way interested in 'becoming one with local customs'. They'd rather eat at a Dutch restaurant (as we did on my first day there) then try their luck with some Russian fair.
In fact, at home, they only eat Belgian fair, Steak and frites and they drink lots of cola, although Mark had been very sick because of bad cola some weeks before, around the same time the Great Belgian Cola Scare was happening in Europe. They mainly have friends from Western Europe and are living in a community that is quite secluded from everyday Moscow life. In short, nothing what I would fancy. It means that, in order for me to get to know Moscow better, I shouldn't be going out with Mark or Tanya too much.

Then, Mark had a story of something that had happened some weeks before to him. After leaving from a bar (stone drunk), he was harassed by three guys. Before they could do anything (did they actually do anything?), Mark decided that hitting his way out of this situation would be the wisest option. So, he damaged some of the guys, but was later, at home, visited by police. One of the three guys was able to identify him. Mark's wife, three days later, had to buy him out of jail for the small token of $500.

The apartment was almost next to the Cathedral of Christ the Savior. A huge church that was torn down by that good old Stalin. He, always showing a dislike for churches in general, had decided the location of the church to be perfect for the palace of soviets. A huge piece of work that never got of the ground since the construction site, next to the Moscow river, kept filling up with water. After admitting their defeat, they agreed on building a swimming pool instead.
But when that too turned out to be a bad plan, some years ago they decided to rebuilt the original church again. Taking 44 years to build the original one, the scheduled 7 for the new version seems like a breeze.

When going to his apartment, after Mark picked me up at the train station, we stopped at a small cafe. Located basically in the middle of a pedestrian street, operating from a small, temporary building, that the cafe was sharing with two small supermarkets and a store selling all kinds of bags. The bag-store was also selling some of Mark's goods. Bags, that is. Mark was friends with the owner of the Cafe, an Armenian guy, part of the local mob. At some point Mark had helped him out with a couple of problems he had. I didn't dare asking what the nature of the problems was. Meanwhile, I was surprised at the hefty price of the beer; some $5!

The Russian mafia isn't actually Russian. The most dangerous brand of Russian mafia actually is made up of Armenians. Unscrupulously killing, mutilating and rolling over everyone and everything that gets in their way. According to Mark, I won't be harassed too much in the streets. By burglars, that is. Since I look like an Armenian, people will think I'll have mafia connections. They'd rather steer clear than talk to me, risking a knife between the ribs or a bullet in the head. The police, on the other hand will figure that, me probably being mafia, I'll have some money to share with them for protection.

When leaving the apartment in the afternoon of the first day, the three of us, me, Mark and Tanya went for a bite to eat. Grandma was going to take care of Jonathan, the couple's little fella. As mentioned earlier, we went to the only Dutch restaurant in Moscow, run by a small, chubby, bald Dutch guy from Amsterdam who had a permanent bittered look on his face.

We where only allowed to eat on the terrace outside, where we did have some good Dutch grub, although I opted for the Borsch in stead of the Dutch meals on offer. At the back of the terrace, a fat guy with an Aloha shirt and a grubby moustache, was taking short films of petite Russian women with too much make-up and too short skirts to be good for them, sprouting short-stories of the type 'Hi, I am Olga and I want to meet German men. I like sports…'. We couldn't get a table inside because a group of some 25 Americans with name tags sporting the text 'HI MY NAME IS ', where meeting that same group of girls that had their mini-movie shot outside just minutes earlier.

I did manage to get inside the restaurant to use the toilet and overheard an interesting conversation:

Bob: Hi, My name is Bob.
Russian girl: I know, I see your name
Just minutes after arriving at the red square, what I was afraid of since coming into town that morning actually happened: The weather turned bad. Really bad. Some big thunderstorms, heavy rain and strong winds made us decide to enjoy a $4 beer (prices only in $, although its forbidden to quote prices in dollars) until the storm cleared. It did after an hour or so, and we continued up Red Square.

Surprisingly, Red Square and the Kremlin are much smaller than I imagined them to be. In the back of my mind, I had visions of the military parades held here, with the Soviet Union's leaders waving to the populace from on top of the Kremlin walls; soldiers, tanks, trucks and fighter planes passing them by. Still, Red Square, with its remarkable tomb of Lenin (then temporarily closed, I recently heard they plan on closing it for good) is impressive. I just figured it would be much more impressive than it actually turned out to be. But whatever way you look at it, St. Basil's Cathedral, more or less Moscow's trademark, is very much a bummer. Old, shabby, almost falling to pieces and very small.

Moscow's most prominent shopping street is Arbat. Recently renovated, the street and its buildings have a really nice, friendly feel, where palm readers, sketch artists and numerous stalls selling everything from cigarettes to necklaces to paintings try to lure every visitor in parting with some of their cash. All seems quite well regulated, with everyone actually selling something here wearing a blue apron, identifying them as being certified to sell.

We were walking down Arbat, when someone sitting at one of the terraces out on the street started shouting at Mark. An old American guy with quite a belly turned out to be an old friend of Mark and had been out of Moscow for close to a year.
Therefore, celebrations where at hand. Mark decided (although Anya opposed) that two beers never hurt anyone (we eventually had close to ten, always half-a-liter glasses) and we where soon off to integrating with the American guy and his colossal friends. All construction workers, temporarily living in Moscow (and not really enjoying the city accept from two or three American operated bars and the 'Hungry Duck', where Russian girls dance naked on the bar) for some project they where working on.

At some point, Mark started confessing that there exists an underground Moscow, complete with shops, trains, busses, apartments and everything you might wish for, totally run by the mob. No 'normal' people are allowed to enter, but 'everyone' knows about it. Part of this underground city is supposed to be made up of the metro system that doubles as a huge bomb shelter. That last part, at least, is definitely true.