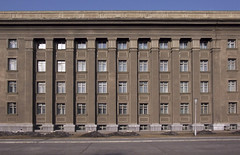 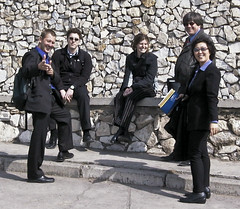 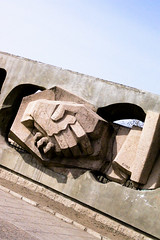 Let's shake on it 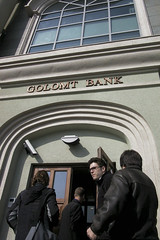 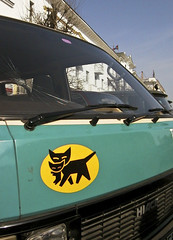 The cutest logo you'll ever see 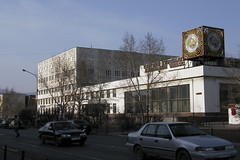 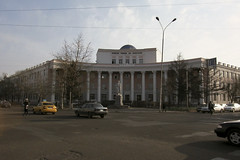 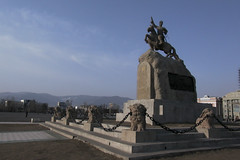 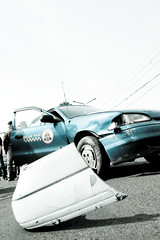 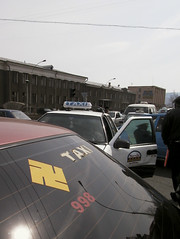 Why not a swastika on the rear window? 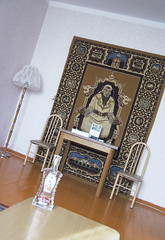 Chinggis in the house
World » Mongolia » Ulaan Baatar » On the street

Monday was used for relaxing. The trip had worn us out quite a bit and the time difference didn't help either. At first, Claudia and I considered calling up Henry to get a beer with, but we decided against it. It would have to wait for the next day.

On Tuesday, Claudia and I both went to our businesses for the first time. We only were given two hours since Hulan, our IESC contact, had reserved the afternoon for an informal geek get together at the American embassy. The embassy is located a bit out of the center, close to the ring road and hidden from view. According to Bob, the senior volunteer who already lived in UB, the Americans are moving many of their embassies to smaller buildings at more out of the way locations. Security was fierce. We had to leave all our electronics, including cell phones, at the door. The Americans got passes that allowed them in the building where as Claudia and I got passes that only allowed us in the building if escorted.

Driving to the embassy from Millie's, where we had lunch together, we got into a car accident. I was sitting in front of the second car with a seatbelt that didn't work. Just after leaving I realised that this was not the time to get into an accident, since I always wear a seatbelt. But alas, some crossroads along the way, the first car of geeks was rammed from the side, lost speed, resulting in us bumping into them again. Nothing serious, everyone was ok.
The next morning, Bob, who wasn't with us at Millie's and therefore didn't get into the accident there, got into his own accident when his car was rammed from the back.
Needless to say, Mongolians are great drivers. They're avoiding millions of accidents a day. It's surprising only so little happens, considering the sheer chaos on the roads.

Two years ago, in Ghana, I suppose I possibly had the best project of the group. This time, it seems I've got the biggest challenge. Henry is going to do consulting on network and information security at what seems to be the most modern bank in the country, Golomt Bank, with a staff of 250. Ryan is working at a smaller bank, where he's going to work on an application that should facilitate currency exchange. Bob has been placed at NewTech, a consulting firm itself, where he's going to work on marketing and sales. Claudia works together with two printing businesses of reasonable size.
Dotmaker, my company, is run by one guy who only speaks a little bit of English. His four, or so, employees all seem to be students who work part time out of the tiny office accross the street from Claudia's Tod Mongol. None of the students speak English. On top of that, the building DotMaker is located in will be renovated, supposedly starting next week, and the business will have to move to a new location.
Claudia has an issue too, though: No one except the director of Tod Mongol seems to speak any English.

In true geek fashion, we started work on the /m2 geekhalla. Ryan took the lead and he went almost berzerk on it. This man's got plans. He claimed it wasn't going to be much work, so when we asked how long it would take for him to build the framework (he's the only one who even remotely speaks the only programming language we can use on that server), he replied 'six weeks'. This wasn't a joke.

Related:  A week in Brighton

On the positive side, my luggage finally arrived today and yesterday evening, after dropping my camera on the floor by accident, it worked again. My karma seems to have changed for the better.