A tree on the Vaal river 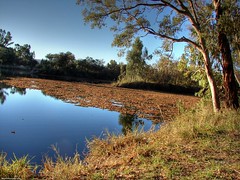 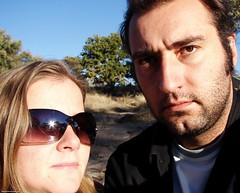 We planned on visiting Parys today. In fact, we were told of a gay couple running a nice bed and breakfast in the, what is said to be, picturesque village of Parys on the Vaal river in the Freestate, about an hour’s drive south of Jo’burg, but although the village, or more accurately, the river, is quite enjoyable, the town, with 50000 inhabitants is practically dead on a Sunday afternoon.

Driving around main street, we found one open restaurant, the Ocean Basket, a chain of (very decent) fish restaurants, and one open snackbar, the Vetkoek Den. A Vetkoek is a bit like a doughnut, but more resembles a Dutch oliebol (similar to a doughnut but without the hole) and it’s an Afrikaans delicacy, often eaten filled (with mince, something sweet, or whatever you can come up with).

Accommodation was also to find. That is, not the venues, for we found five or six, but not the gay couple’s place. But actually finding one where someone could answer our queries was near impossible.

We decided to spend an afternoon chilling in Parys and then to head back to Jo’burg. We’d leave the gays in Parys.

Related:  Sports nights
This text is available under a cc-nc-a license.