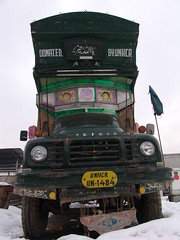 So many departments, so many doors, so many faces. Some 200 people work at the DACAAR main office and I think I saw them all today. Also, although most if not all of the people who work in the field are Afghan, I noticed that quite a significant number of the office workers were actually expat.
DACAAR being a Danish organization, it isn’t a surprise that most of them are Danish, but I’m now the third Dutchee in the compound.

The morning started rather cold. Although I was quite awake, the cold made it difficult for me to get up. Then, I had to boil water to get a warm bucket bath, which wasn’t all that bad, besides the stone floor being icy cold.

Also, although my two housemates seem to agree that Afghans are not the hardest working people in the world, I did get a PC to work on within minutes of me finally sitting down at my workplace.
Lunch is free, and not too bad. Or maybe I was just very hungry. A bit on the cold side, we got something that resembled a pasta Napolitano, with extra bread and a spicy minty sauce on the side. Deserts were loads and loads of oranges and bananas.

Although my headache’s gone, I still get out of breath running up stairs. I already considered working out yesterday, apparently there are loads of fitness places in Kabul, but it’s a good thing I didn’t go. I could have dropped dead.

Related:  When the food is good…

A question of money

Consider this: there’s a really posh area in Kabul where all the rich people live. Rich expats, that is. Diplomats UN people, you get the idea. It’s not uncommon, I was told over Peking duck today, for the rent of these places to be upwards of 10000 dollars per month. I am told that this district has ‘several hundred’ houses.
DACAAR’s budget for 2004 was close to 7 million dollars. Not that DACAAR rents houses in this district, but the 7 million would cover the yearly rent of some 70 of these houses. Where does all the money go, that goes into renting these houses? I doubt the Afghanis keep it in the country. It makes you wonder what the use of all this development aid is…

There seems to be a sizable expat population in Kabul. It’s a good thing that most of these really stand out (and I don’t), so that I can blend in more easily. What’s intriguing is that all the expats in DACAAR whom I , so far, have asked, have not ‘served’ in a development organization before. For these people, Afghanistan is their first ‘experience’. Strange, considering the current situation in Afghanistan. I expected more seasoned development workers.

Meanwhile, although this is only my second day here, I can see how easy it is to live a very sheltered life here. In the morning, you drive to work, in the evening, you drive from work, go home, maybe drive to a restaurant and then drive home again. I’m not really enchanted by this.