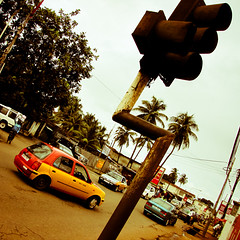 Antivirus producer AVG recently released a report which revealed that seven of the ten safest countries to surf the web in are in Africa, with Sierra Leone being the safest of them all. The numbers seem impressive, with the chance of being attacked in Sierra Leone a meagre 0.14%, a far cry from Turkey, which tops the overal list with a chance of being attacked at 10%. AVG didn’t put a time frame on these chances, but one of their bloggers implies that these are the chances on any given day.

More impressive numbers reveal that 127 million computers were monitored in 144 countries. Depending on how you count, however, there are some 193 sovereign states, meaning that some 50 were not included in AVG’s research.
Judging from the pretty infographic below (available here), countries not part of the report include several countries in central Africa, as well as Myanmar and Mongolia. I can understand leaving out, say, Myanmar or North Korea, but not including Mongolia makes very little sense. And nor does touting Sierra Leone as a safe country when multiple significantly richer African countries are not even included.

But what’s more is that a current estimate for the number of internet users in Sierra Leone is only some 15000, the only country in Africa with fewer users, but marginally so, being Equatorial Guinea, where the population is just above a tenth of the population of Sierra Leone.

With a chance of about 0.14% of being attacked on any given day, even if we assume that all these 15000 users use the internet every day on their own computer, only some 20 users a day are under attack. With AVG commanding less then 10% of the antivirus market share, all this means that we have to thank AVG for their insight into the safety of Sierra Leonan internet use based on about 2 measured attacks per day over a period of one week.

Indeed, this is hardly reliable.

On a related note, the quality of internet access is so bad and so expensive here, it’s no wonder internet use is so low in this country.