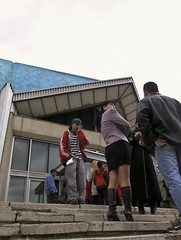 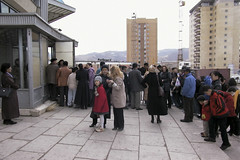 Queueing for the circus 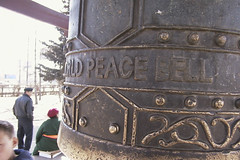 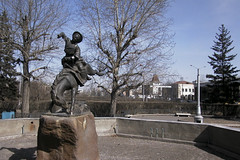 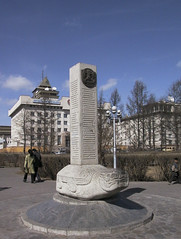 A turtle with a menhir on his back 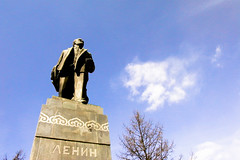 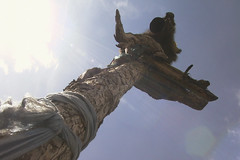 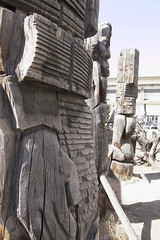 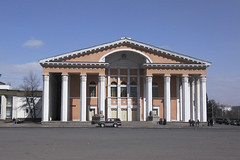 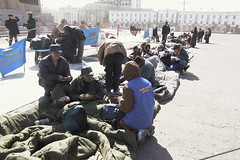 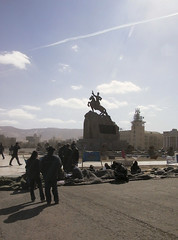 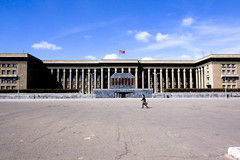 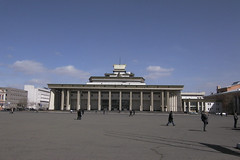 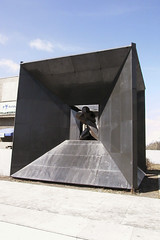 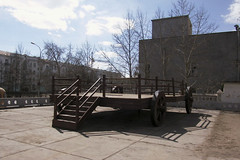 Used to roll gers around 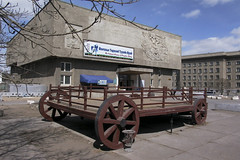 In front of the museum 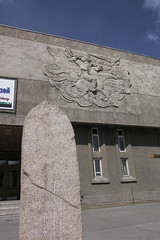 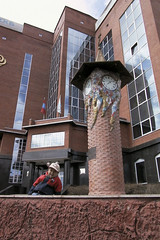 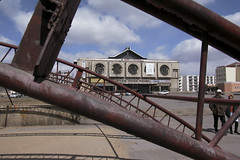 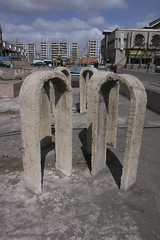 It's art Jim, but not as we know it 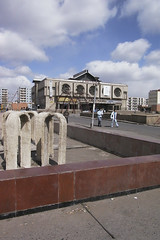 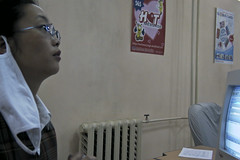 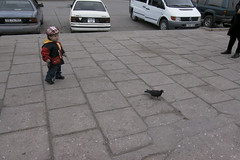 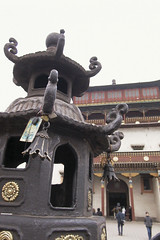 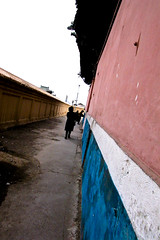 Walking around the wall 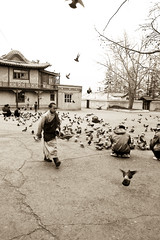 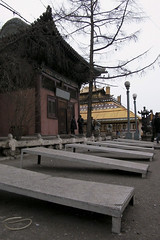 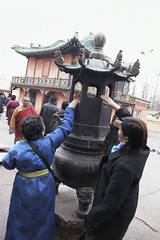 Friday was going to be the first real day at work where we had to discuss the work plan submitted by our counterparts and adjust it where possible. We had planned to call it an early night the day before, but were very unsuccessful. I was dead tired on Friday morning, but still had to make the appropriate changes to the work plan AND meet USAID representatives and the American ambassador in the morning.
I managed and arrived at DotMaker at 4 o'clock. To only find a closed door.

In the evening we partied again. It's such a hard life, isn't it. We started at the Steppe Inne, a bar open once a week on the grounds of the UK embassy. We were hoping to meet some guys and gals of our age, but were surprised to find the average age to be over 50. Still, it wasn't totally fruitless since I met one of the UB hashers there.
After eating at the 'French restaurant', which wasn't very spectacular nor really French, Hulan took us to River Sound, a reasonable club with some good and some bad live music. The best part of the evening, without a doubt, was the cat fight that lasted for minutes. The joy of arkhi.

Ryan had his mind set at going to a strip club on Saturday. Although no one had real objections, except for Ryan, no one was really in the mood for it. Originally, the plan was to visit the Russian circus that had come to town, but we were too late to get tickets. The strip club that was supposed to be right next to the Chinggis Club Ryan dragged us to didn't exist, so the saturday evening turned out to be fairly quiet.
Having set my mind on the circus, I was able to get tickets for the Sunday afternoon show, getting the best tickets in the rather small building: on the first row, right in the middle. I vaguely remembering going to a circus when I was four and I believe this was the very first reprise.
It was a lot of fun, although it wasn't all clean fun, with a boxing kangeroo, monkey's performing tricks and a rather stressed out zebra. Still, the dancing chicks were lovely and the trapeze artist was quite amazing. The clowns too did very well with the kids in the circus.

On Saturday, I had visited two good museums; the National Museum of Mongolian History and the Zanabazar Museum of Fine Arts. I did remember that Amidalah's headdress (from Star Wars) was modeled on something out of real life, but to see the actual headdress in the History Museum as a cultural item of the Khalkh ethnic group was quite a surprise. The museum has an outstanding collection of national dresses and some are truly fantastic.
The Fine Arts museum is also enjoyable, among other things because of the paintings 'One Day in Mongolia' and 'The Airag Feast' by B. Sharav. At first sight, both paintings show a multitude of cultural events on each fairly large canvas, but on closer inspection, many of the events involve sexual acts, vomiting and S&M.
If youï¿½re wondering, the name 'B. Sharav' is not misspelled. It's the way names are written down here, where the first name is more important than the family name. This is a result from Soviet influence in the 1920s, when the use of clan names was abolished. Only in the 90s were clan names allowed again when some 20% of the population claimed the Ghenggis Khan clan name. Mongolia's only cosmonaut went for the name 'Cosmos'.

Not knowing when we would have the time again to satisfy our inner cultural needs, I tried to push Henry and Claudia to visit the ballet scheduled for the night after we went to the circus. They didn't go and Henry and Claudia opted instead for a bottle of vodka right next to the theater. When I came back, Claudia was almost unable to walk.
The show was very good, although it was sad that less then half of the theater was occupied. A stark contrast with the sold out circus. The ballet was a one-off, the circus was doing a total of ten shows in UB.

A worrying sight is the increased number of people using mouthcaps, afraid of acquiring SARS. Last week, the first two cases of SARS were recorded in Inner Mongolia, the Chinese province just across the border and I learned today, from another Dutch guy who's currenlty living in Mongolia that here already five cases of SARS have been reported. Not a good thing.

Today, I had the honors of grading the nominees for the 2003 Mongolian web awards. Most of the nominees weren't very impressive, but some were very good. Most notably, a reference on Mongolian sign languages, a dating site and a compendium of tutorials in Mongolian on using Photoshop. The awards ceremony is scheduled for next week.