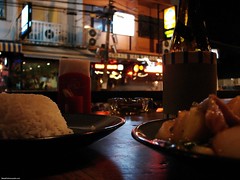 Sweet and sour prawns, no pork, with rice and Chang beer 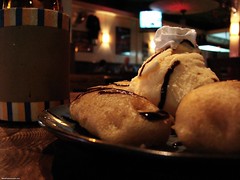 Thai seem to be great fans of Boney M. As I was strolling down the streets tonight, no less than three times did a Boney M song come my way. “Ma Baker”, “Brown girl in the ring” and “Daddy cool”. Indeed, Wikipedia claims that Boney M, along with ABBA, are among the most widely known 1970s Western music acts in such regions as Iran(!) and south east Asia. True masters.

Thai eat out 5 or 6 times a day. No wonder when portions are quite small. Interestingly, take aways, what we have every afternoon, after a lady stopping by everyone to ask what they’re interested in for the afternoon, practically always come in plastic bags. Like coffee.
What’s more, the plastic bags always contain a lot of air, making them bulbous. I’d think that pretty hard to achieve, but even the little bags with chili are bulbous.

What’s for dinner in Thailand? Part 8

Tonight, it was sweet and sour shrimps. Well, almost, I ended up with sweet and sour pork. With rice. And because portions are small, there was room for desert: fried banana with ice cream.

Yesterday afternoon and today, I twice ordered a vegetarian dish (panang dow hoo and kaeng kiao waan jeuy, if my memory serves me right), but without success. On both occasions, someone had thrown in chicken. And last night, it was a dish which, according to my colleague Tina, tasted like spaghetti with meat sauce, but was actually a real vegetarian dish. I had spring lolls as a starter.

One of the systems in use at HDN is a mailing list package called Lyris. Some of the locals call it… Rylis.

Plastic surgery is extremely cheap and different here. One of the three English newspapers (that I know of), here in Thailand, has a large daily section with classifieds. Half a page is generally set aside for medical treatments, including plastic surgery and, of all things, stem cell treatments.
One practice has a daily advertisement listing its services. Top of the list? Sex change. Cost? Less than 1500 dollars…

On a sidenote, according to Alexa, probably the leading website ranking service, my site, the one you’re now looking at, is now among the top 300.000 most popular websites worldwide. Considering that, according to some sources, there are some 125 million websites, this is not all too shabby. In fact, this means my website is amongst the top 0.25% worldwide.
Still, Google analytics has shown a not too great last two weeks. I’m worried.

That said, my site being ranked, currently, as number 288366 worldwide, Reza Pahlavi’s website, the son of the last shah of Iran, ranks in at 256875, a very comparable ranking. Meaning that not too many more people check out the website of the last Iranian king’s son than do mine.