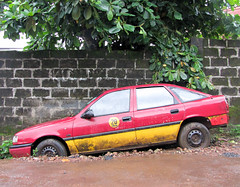 Flying in to Lungi, Sierra Leone’s airport and the only commercially operating airport in the country, treats a window seater to stunning views. Well, if you’re lucky enough to sit on the correct side of the plane.
The airport and town are on the two sides of the bay of Sierra Leone, which also is the third largest natural harbour in the world. Not that that’s in any way convenient, because to get to or from the airport, you’ll have to cross the bay, somehow. Choppers, at 80 USD for a one way trip, are an often used mode of transport (and have known to fall from the skies), but the best balance between cost and speed are the speedboats, which put you across for a still pricey 40 USD. Slower and cheaper options are available, but they can take many, many hours to see through.

Nevertheless, all this, as well as Freetown’s still challenged state of affairs, can’t be seen from the plane. The north of the bay, which holds the airport, is an oasis of meandering rivers in between lush vegetation, while the south side of the bay sees the town sprawling on the slopes of a mountain range literally crashing into the sea. Indeed, not at all unlike Cape Town, though the built up areas are smaller, here, and the mountains are closer to the sea.

Niamh has been put up in one of the Goal houses, in the slightly posher part of town, not far from the nightlife Mecca that is Aberdeen. We’re sharing a ground floor, still from which we can see the sea in the distance, but with a bit of luck we’ll upgrade to the first floor, where we’ll have a nice big balcony to see more of the sea from. We. Will see.

Related:  Good to be back

In order to avoid the extortionist cost of flying into Freetown from Europe, my crabwalk allowed me to see a few loved and lovely locations, as well as save on the overall cost of the flight. One of the passengers on my Arik flight from Dakar, through Banjul to Freetown had hopped on in Banjul, the capital of Gambia, where he flown to using Viking, a Scandinavian low cost airline, which had brought him from London to Banjul for 250 pounds. Adding to that the significantly cheaper flight from Banjul to Freetown, around 125 USD over my 250 USD from Dakar, a mere 20 minutes away from Banjul, the total cost of his flight from Europe to Freetown was in fact a tad cheaper.
But he didn’t get to see either Hungary, Serbia or Italy.

Sierra Leone, being the back arse of nowhere, is the international air travel’s black hole. Airlines go out of their way to make it hard for their customers to book flights to Freetown, to the extent where some don’t even mention it on their website, like Royal Air Maroc.
It means that getting in or out is both expensive and a hassle.