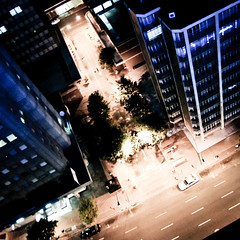 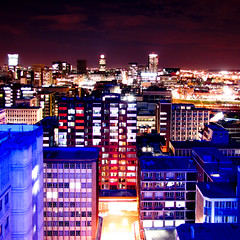 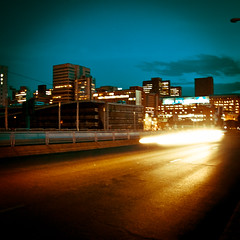 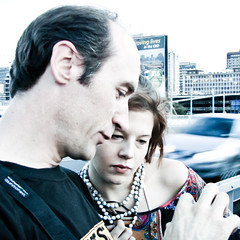 An explanation is required 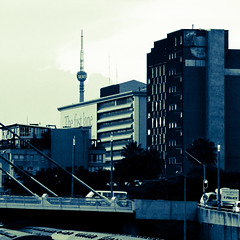 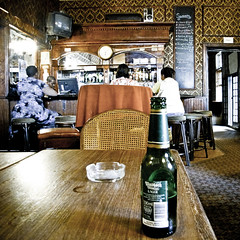 The Joburg photowalkers, organized yet another walk around Joburg, this time in and around Braamfontein, yet another area of downtown Jozi which has been regentrified in the last few years, and now even sports a Lomography store, as well as the obligatory art galleries.
The early evening walk saw an excellent turnout, some 40 whities, one black woman and one Indian man, with an average kit value of, I suspect, significantly upwards from 1000 USD.

We started at the over 100 years old Kitchener’s Carvery, an old hotel and bar, walked around Braamfontein, ended up on the roof of the Orion hotel, some 19 floors up, before everyone dispersed. Three guards, apparently in the pay of the suburb of Braamfontein, tried to secure our safety, though for them keeping the group together must have been like herding cats.
With a small few, we had a few beers at the Carvery before dispersing ourselves, and that was a truly surreal experience, like being caught up in some weird David Lynch film.

The bar of the hotel is over 100 years old and looks it. Wooden paneling on the walls, faded pictures and drawings on display, commemorating the time of the Boer wars, but with samosas and prego rolls on the chalkboard. The bar’s wine list consisted of six different, opened, boxed wines. In a side room, a DJ was pumping reasonable funky beats from his MacBook, under the watchful eye of a spinning disco ball, but with no one on the darkened dance floor.
A lanky black man, caught up in his own world, wearing black lederhosen, was swinging to the beats, while remaining seated on his barstool, obsessed by the smoke seeping from his cigarette. A very drunk khoisan with almost no teeth in his face and wearing a yellow fluorescent jacket, was toying with a tiny santaclaus playing a mandolin while santa’s was spinning and jingle bells was emitting from his arse. The khoisan was a boxer from the Cape, waiting for his next fight.
When a happy-faced black lady bounced in, casually dressed and wearing a cocktail parasol in her hair, followed by a muslim in djellaba, proceeding to the disco area and started to dance, we were certain the bar was channeling Mr. Lynch.

One thing I learned today, talking and listening to some of the other photographers, is that ‘blogging’ is now an accepted occupation, something you can actually ‘do’, as opposed to something that happens on the side, while you actually do important things. “What do you do in real life?”, “I blog. About living in Johannesburg”. Seriously?
So, who knows, maybe there’s hope after all for yours truly.