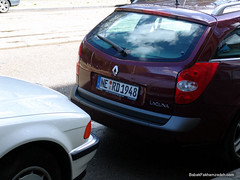 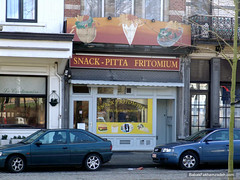 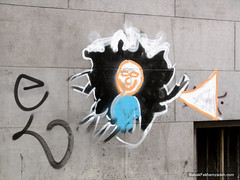 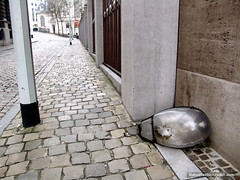 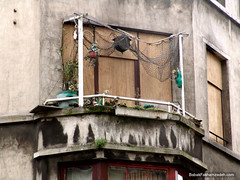 Since this is Belgium, it is near impossible to obtain a complete list of the murals in town. Online, there’s a list available which is incomplete, possibly because it hasn’t been updated in two years even though some old ones are missing too. At the comic strip museum, the one place where you would think a full list would be available, there’s a walking tour, but that one, too, is dated with some newer murals missing but also with some older ones not on the map they supply.
And then, besides the official paintings, there are the murals which are not really part of the collection, but surely fit the bill nicely.

At around two thirty, I finished my task. The last mural was a bit out of the way, at Bruparck, the artificial entertainment village on the edge of the city. But visiting that horror also gave me the opportunity to check out the renovated Atomium. All shiny and new.
Walking around Brussels, trying to understand the maps and their faults, I had gotten tired. I walked back a few metro stops from the Atomium, in the sun (yeah, now I was finished), before succumbing and taking a metro into town.

Belgians love their sandwiches, probably about as much as their pommes frites, and the best sandwicherie ever, was ”le Picodon” until the building was vacated at least a year ago. Now, many sandwich bars offer good sandwiches, but none as good as le Picoden, or I have not found them yet.
But today, in the bowels of metro stop ”de munt” I found one that is very reasonable and also extremely affordable, selling sandwiches for as little as one euro.

Visiting Brussels has to be observed through a few rituals, two of which I had already covered: visiting ”De ultieme hallucinatie” and “a la mort Subite”. A third ritual, as I mentioned earlier, can unfortunately no longer be observed: getting a sandwich at ”le Picodon”. Which leaves the last ritual: having dinner at Da kao. Already some years, they moved, improving the setting considerably, upgrading the quality of the food, insomuch as this was possible, and also changing the name, to ”Da Kao 2″.
Certainly, busy restaurants do not favor single people. Although I started out at a table for four, pretty soon, i was joined by a couple. And to make things more intriguing, another single, but significantly older man on my other side was constantly talking to himself. But in my direction.
And I couldn’t help but wondering what was up with the couple: The girl was a true beauty and showing off, with a tight shirt, bare arms and a short skirt with stockings, but the guy was a total geek with long hair, torn clothes and a speech impediment. The girl acted insecure, So maybe that was the deal. But ain’t there no justice in this world?

But what good are rituals if you can not improve on them? In the former butcher’s hall, close to the Bourse, they installed a very nice bar reasonably recently. It’s under a roof, which is nice at this time of the year, and they have couches, which is great.
Not that the lack of roofs stops people. The outside terraces are packed, again. The sun came out later in the day, true, but now it is almost dark, and quite cold outside. It’s as if these people want to force spring upon themselves.
I do hope that next time. The four CDs that play at random at the butcher’s hall are extended to a larger repertoire next time.

At some point, at the table next to me, a girl sat down, with looks that conjured up the image of someone really good looking. Except she didn’t.