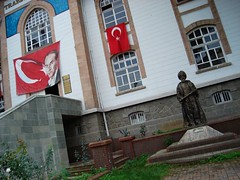 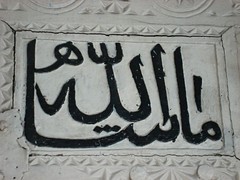 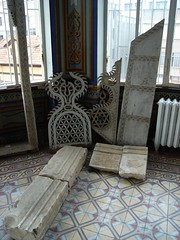 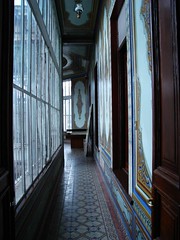 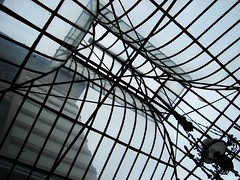 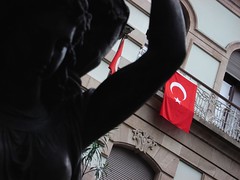 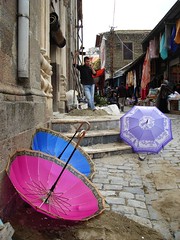 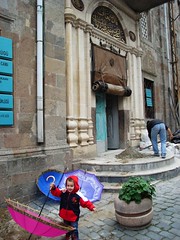 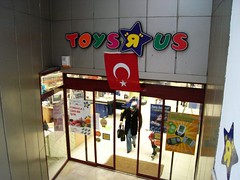 After staying the day 'in', in Goreme due to the cold and the even more unpleasant rain, I was forced to take yet another night bus, this one to Trabzon, on the Black Sea coast, way out east, some 150 kilometres from the Georgian border.
A typical port town. Lively, very active, very commercial with seemingly every building in the city being, first and foremost, a shop.
The people are surprisingly 'light'. Lighter than in Cappadocia or even Istanbul. In fact, it would be easy to mistake some of the locals for Germans. Many have blue or very light eyes. Then again, there's also a German and an Austrian consulate. Maybe they've been there for a long time and get bored easily.
In fact, the city as a whole also feels much less Turkish than even Istanbul. The shops sell anything from Prada do Daniel Hechter, to the local versions of the same brands, besides of course the obligatory kebabs and baklava. Girls go for coffee and cakes after a hard day's shopping, boys hang out in front of the cinemas, the bars are busy with local youngsters smoking heavily and drinking beer. A few girls even show some leg, above high boots and under a knee-length skirt. The next morning, I noticed several Natashas leave hotels in the area. The TV in my hotel room has a channel with badly produced, hard core porn with only ugly people.
Indeed, Trabzon feels more Russian than Turkish.

In the afternoon, I found myself on a quieter square, being looked upon by Mustafa Kemal, who else, drinking tea, while a rooster, strutting around, seems convinced the sun has only just risen.
After looking in the mirror this morning, I also haven't seen any tourists yet!

On one of the larger bus stops from Cappadocia to Trabzon, the announcements over the intercom were voiced over the opening notes of 'My heart will go on' by Celine Dion, from the movie Titanic. Those 15 minutes we were there, I was quickly losing my cool. No wonder all the employees had a distinct crazy look in their eyes.
I don't fancy bus rides too much. Well, not at all. Then again, Turkish buses are seriously the best I've ever encountered. What's worse, you don't really have a choice. The train network is limited, a large (and reasonably important) city like Trabzon isn't even on the network. So I already have my bus ticket onwards, to Dogubayazit, right on the Iranian border and next to Mt Ararat.

Earlier, we passed a scale model of a typical Dutch windmill in between a huge collection of Soviet style apartment blocks.

A word on Turkey and the EU

For what I've seen, Turkey seems to be as close to Europe as, if not more so than, countries like Romania and Bulgaria.

A word on Turkish food

I've never been really impressed by what Turkish restaurants in Holland produce, nor was I much intrigued during my last visit to Turkey, three years ago. However, I've now found that, if you stay away from the meat dishes, the food is extremely varied and also quite good, if not delicious.
In fact, it's actually not too dissimilar from Greek food.