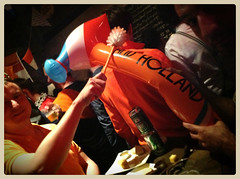 The Dutch consulate in Shanghai has taken up the tradition of throwing a three week party around Queensday called the Dutch Days, this year's centerpiece being an extensive party on the actual day the Dutch queen was to abdicate in favor of her son. Tickets were sold out weeks in advance so we were left with the alternative, hosted by a bunch of Dutch students in a bar that makes most of its money selling overpriced Belgian beers.

Arriving early, with Benno, the only one, besides us two, apparently in good enough shape after the night of partying from the previous night's wedding, we settled on a few stools, at two high tables in the middle of the room. When the organizers emptied the room to make way for the throngs of party goers, we were never asked to move, clear the table, or pay for that matter.
As a result, we had the best seats in the house added to which the constant flow of sponsored beer, Dutch fries, cheese and apple pie meant we had a reasonably smashing time.

A major disappointment, though, was the lack of both the Dutch anthem as the newly composed "king's song". And no bitterballen.