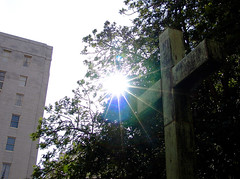 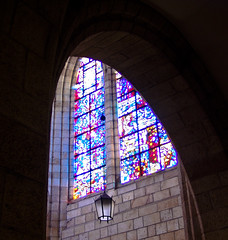 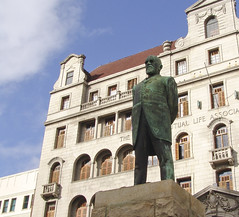 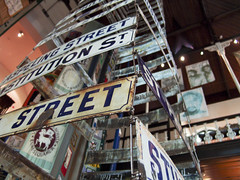 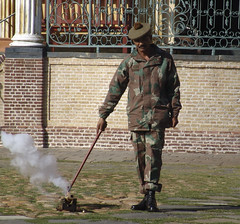 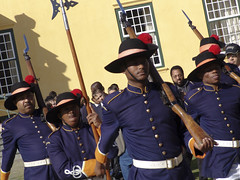 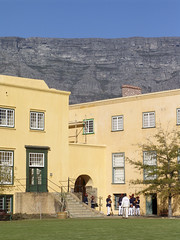 Table mountain in the background 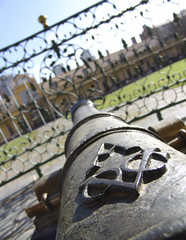 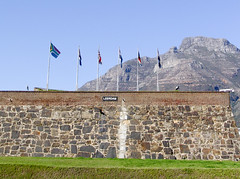 One of the oldest European buildings in Southern Africa, this Fort never saw any action in it's 350 years. The castle is nice enough and the key ceremony, held daily at 12pm is mildly entertaining, notably for the tiny canon that roars.

We spent most of the day walking around the city, visiting the many sites the town has to offer. It's easy to see Cape Town is a much more friendly and more mellow place than Jo'burg. Gen, who had lived in Jo'burg for six months said that in that period, she felt she had aged 10 years; Now, after three months in Cape Town, she had already regained five of those 10 years.

After the fort, we walked down to the District Six museum. Not much of a real museum, it's mostly comprised of pictures of people who lived in District Six before it was bulldozed by the South African government for being too much of a multicultural area in the 70s.
We got a small tour from one of the original residents, Noor Ebrahim.

South Africa is mall country. Over the last decade, more and more businesses have set up shop in suburbs, leaving the downtown area. Similarly, more and more whites have left the downtown area to live in the suburbs, sparkling the rise and rise of mall culture.
The bad part is that, if you want to party, you almost always end up in some mall. The good part is that facilities are spectacular.

Funnily enough, our taxi driver from Kimberley, a rather shy kid in his mid-twenties, had only been to Cape Town once, some 13 years ago, around the end of apartheid. He told us we really had to visit Golden Acre, 'a fantastic complex' of shops and entertainment. A mall built in the 80s, it's terrible.

Related:  A busy weekend with an apple to round it off
This text is available under a cc-nc-a license.