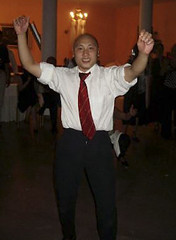 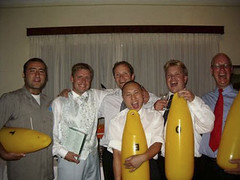 For on the boat 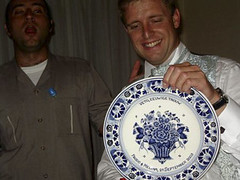 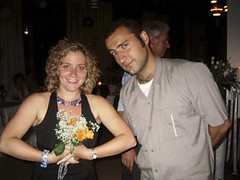 The wedding ceremony was held in a very small church. Apparently it had been difficult to find a church where Frodo and Melina could be married since most churches didn't want to marry someone who hadn't been baptized (Frodo).

The party was great, although the more official part took a bit too long. No less then some 250 people had been invited for dinner. Nothing, compared to the 400-500 people that show up at an all-Greek wedding. The mix of Greek folk-dancing, pop and Dutch classics was a success and we, including the new couple, went on until after three in the morning.
Wong did a special routine after a Greek dancer had invited, nay, commanded him to dance.

Dead tired, we crawled out of the bed after twelve the next day for a day of relaxing at the beach resort were the party also had been held. There, we celebrated Joost his 30th birthday with special Russian vodka and Red Bull. Vodka I had taken with me all the way from Holland.