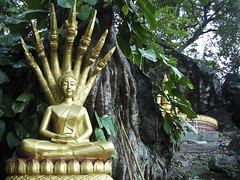 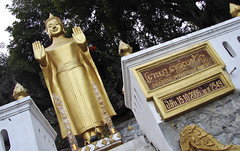 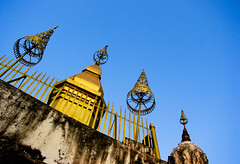 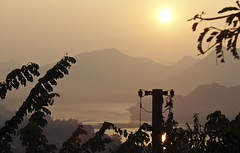 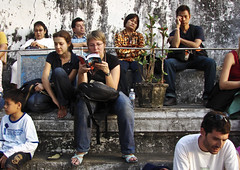 We’re fleeing Thailand once more. Tourist visas, issued on entry, are only valid for 30 days. Easy to overcome if you apply for a visa before entering the country, but as nobody told us in time, this semi-paid vacation is our only way of prolonging our stay in Thailand.
Hopefully, Betsy will now get a 60 day tourist visa, valid until after her expected return to Holland. I’m applying for a non-immigration visa, which is supposed to allow me to stay in the country for longer periods of time.

There are no direct flights from Chiang Mai to Vientiane, the capital of Laos. Either you fly through the former royal capital of Laos, Luang Prabang (population: 26.000), or you fly through Bangkok (population: 7 million).
A third option is to take a domestic flight to Udon Thani, from where it’s a two hour drive to Vientiane. And then there’s the option to drive all the way, from Chiang Mai. A mere 14 hours on the road.

We’re staying one day in Luang Prabang, while it’s a public holiday in Thailand and the Thai embassy in Vientiane is closed. And Luang Prabang comes highly recommended. Lonely Planet calls the town “a tonic for the soul” and, indeed, it is a very mellow town, assuming you can ignore the hordes of tourists crowding the main street and the top of Phu Si hill, in the middle of the village, around sunset. The town is on the Mekong shore and one of its attractions is the plethora of restaurants on the riverbank, overlooking the river and the hills on the other side.
The Mekong, originating on the Tibetan plateau, flows through Myanmar, Laos, Thailand, Cambodia and Vietnam. It’s name is derived from the Thai “mother of all rivers” and houses more species of giant fish than any world river, most notably the Giant Mekong Catfish, the largest recorded coming in at just under 300kg.
The city of Luang Prabang is a UNESCO heritage site, one of the results being a ban on buses and trucks. Also, with only two bars where dancing is allowed, all public venues, including restaurants and bars, have to be closed at 11:30pm and all tourists, and I presume residents too, need to be indoors by 0:00am.
And then there are the hotel house rules, one of which states that the making of sex movies is not allowed.

The city reminds of the Hungarian village of Szentendre, just outside of Budapest. There, too, the local economy is driven by tourism, that village is also on the shore of a mighty river, is quiet and has hills in the area. But more surprisingly, the feeling of the two towns is also similar. And the “Laos whisky” tastes exactly like Palinka.
In the center of Luang Prabang, on Phu Si hill, in the rocks, you can also find some giant-sized footprints, supposedly of the buddha himself.

Entering Laos, on the entry form, we had to fill in what race we were.