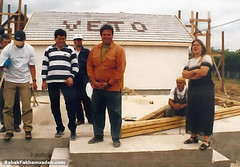 The site manager giving a speech after finishing the house with on the right Kelly, translating the speech 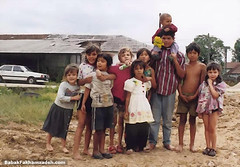 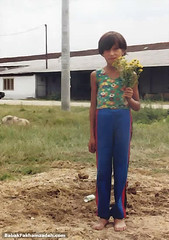 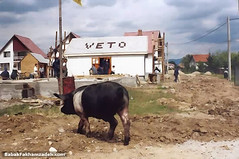 Its always difficult to get the right people 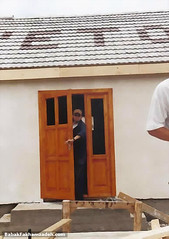 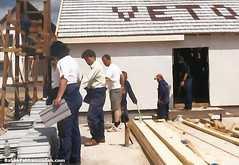 The human chain finished up the last bits 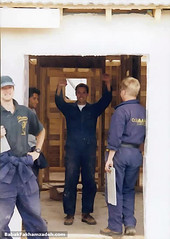 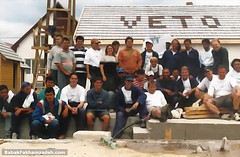 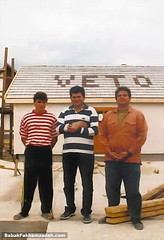 From left to right, the owner, Habitat's main manager in Romania and the site manager 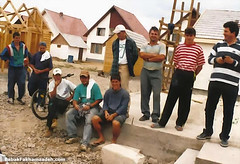 Some of the Romanian workers 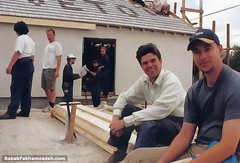 Friday, by far, was the most difficult day of the week. Some of the guys had only gone to bed at 5:00am, getting up at 8 again. Building went terribly slow. However, a human chain we formed at the end of the day to get all 1400 tiles on the roof, and that made quite a difference. We even convinced Habitat into us painting a number of tiles red to make VETO appear in huge letters on the roof.

Not that the house was completely finished. Just the walls and the roof were standing and all windows still had to be fitted. Still, all that was already planned to happen at a specific later time. We were just needed to make the house waterproof. Although you could easily argue that a house with holes for windows isn't really waterproof.

After being finished, some speeches followed, the most emotional, by far, being the speech by the future owner of the house, whom had also helped in building the thing during the week. Occasinally, his pregnant wife would come and visit us to see how we were doing. During lunch on Friday, we had one pizza left, since Marco was staying at home because of his strained ankle. I went round with the pizza and also stopped by the couple, future-to-be owners of the house. The guy didn't want the pizza but urged his wife to have some. First only one slice, but when I also offered a second slice, her husband also pressed her to eat the second slice.

Everyone had planned to leave on Friday evening. About half the group would take a train from Oradea to Bucharest, the other half would go in the opposite direction, to Budapest and then on to the Netherlands. Just before taking off, the same lady who had made us the typical Romanian sandwhiches earlier in the week, now cooked us dinner. Truly truly wonderful stuff, filling everyone to the brim. In addition, she also made everyone a good lunch packet of sandwiches for on the road. Again, the amount of butter occasionally surpassed the amount of bread in the sandwiches.

Saying goodbye to Emil and the owners of the house, leaving our poker table and an unused coverall as tokens of our appreciation, we left a tiring but very interesting and fulfilling week behind us.

We were driven to Oradea in two shifts, the Bucharest group going first. Our train was some 50 minutes late. But when it finally arrived I located my cabin and was sleeping in less then 10 minutes.