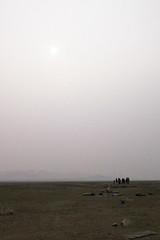 The sun over the Mongolian plains 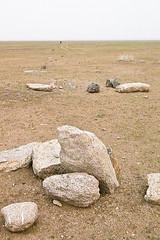 Notice the face in the rock 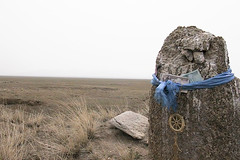 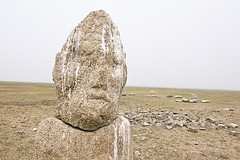 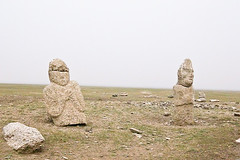 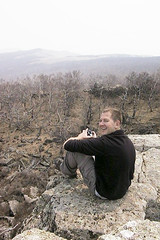 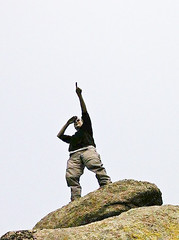 He went that way! 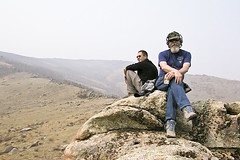 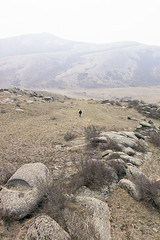 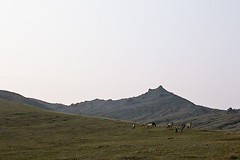 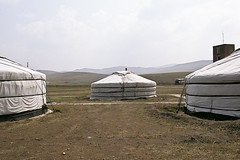 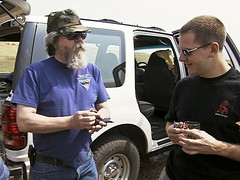 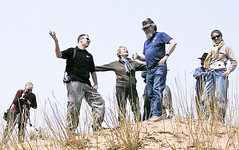 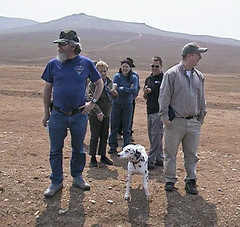 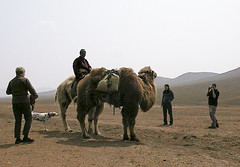 Last weekend, Henry and I, together with seven other people, visited the Khustai natural reserve park. After the Takhi, the Mongolian wild horse, became extinct in the wild, breeding programs were set up in several countries with the aim of reintroducing the species in Mongolia.
Sponsored, among others, by the Dutch government, the park oversees the reintroduction and makes sure the area is reasonably protected.
The horses themselves are not that impressive. Like the 'regular' Mongolian horses, they're rather small, although their light gray white skin does make them stand out. The park itself, however, is quite nice: rolling, sometimes rocky, hills with numerous species of wild animals and hours and hours of tracks to hike.
The group we went with was an offspring of last Tuesday's Hash. Henry and I set that Hash around the Zeisan memorial. On Monday it had rained all day so we decided to set the hash only shortly before the run itself. Not that it made any difference. Although it was dry when we started setting the trail, by the time we were halfway through, we were caught in a bad rainstorm: cold, heavy rains with an even colder storm. By the time we were done, most of the tracks were already rained away. Funnily enough, minutes later, when the hash was to start, the sun came out and we ended up with a really nice evening.

Today I had my first real working day, at Capital Bank. Last Friday morning, at 8 o'clock, I was introduced to the employees at the bank and today I actually really started. Or… well…
At first, I was going to discuss my work plan with the director of the bank on Thursday who, as it turned out, doesn't really have much of an idea as far as what needs to be done. We rescheduled the meeting to Friday afternoon, when the person, responsible for the company's website, would also be present. Not really though, since all banks in the capital were having a basketball competition on Friday afternoon, Saturday and Sunday and he had to be there as well.
So, rescheduling again. This time to Monday morning. The director himself had already left for a three week trip to the US but when I arrived at work, actually no one whosoever was there. Sure, the cute receptionist was able to tell me that 'they' were late, but I could see that myself.
At 3pm I finally talked about my project plan with the marketing director. Although he knew slightly better what needed to be done, he tried to steer me more into networking the company. Both for secure intra-company transactions and setting up a network for sending and receiving Moneygrams (a sort of Western Union Money Transfer). I made it clear that was not my business, although I might be able to involve Henry, another geek. Currently, I doubt there will be enough work to keep me busy for another two months.

Related:  5 hours
This text is available under a cc-nc-a license.