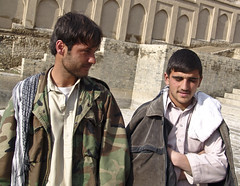 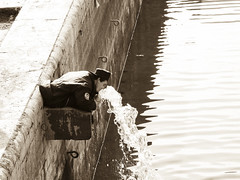 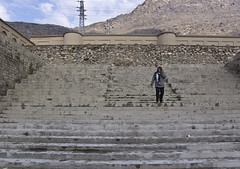 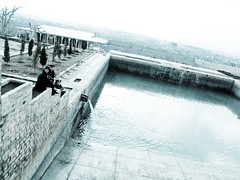 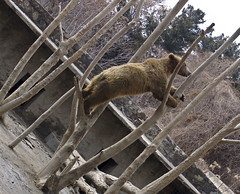 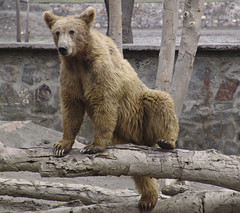 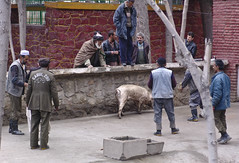 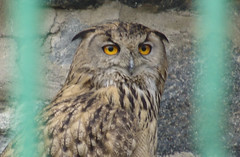 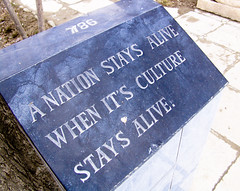 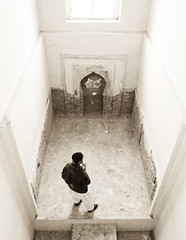 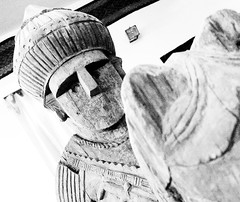 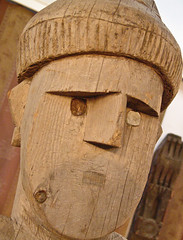 Because on Thursday I was still struggling badly with my cold, I didn't go out at all. The same reason why I staid in bed until 1pm. But the more reason to get out of the house and do a hash. Besides, I had to pay up today to get the discount for the 100th Kabul Hash, coming up on March 18.
It was a relaxing city hash, where we got to see some shops selling coats made out of dog fur and a typical Soviet underpass underneath what probably is Kabul's most busiest square. Not that it's dangerous to cross, since all cars nearly don't move at all here.

Afterwards, Giovanni and I stopped at Lev's, where one of his housemates was giving something of a going away party. However, because the party had started at the awkward time of 1pm, it was already basically over by the time we arrived..
That is not to say we didn't have any fun. Good drinks and wonderful food made for an enjoyable evenings before we headed off to home again. Rather early, but I was still recovering.

On Saturday, we visited the National Museum of Afghanistan. Renovated with the help of the Japanese, the place was completely bombed out, not unlike its neighbor, the Darulaman palace. Now, the museum is again open for business and is currently showing a very decent and interesting exhibition; art from Nuristan, the province in Afghanistan where some of Alexander the Great's people decided to set up shop, after they had gotten too tired of his military campaigns.
Interestingly, some of the art reminded me of Celtic work, and of old northern European work, but also of ancient Mesopotamian stuff.
While we were there, the museum was overtaken by hordes of Afghans, students at the Kabul university, being trained as teachers for high schools in the country. Afghanistan, where until not so long ago women were not allowed to go to school, has a huge shortage of schools and teachers. Many NGOs are working on improving this situation. It was nice to see that many Afghans are working on this as well.

Afterwards, picking up several people, meaning that Raymond had to sit in the back of the car, we went over to the Kabul Zoo.
No, Marjan the lion no longer lives there. Marjan, 40 years old in 2002, died after having survived a lot of hardships. He had lost one eye and had become lame, after quite an incident. A Talib fighter had climbed in to the cage, after which the starving lion ate the bastard. The poor man's brother later came back to throw a grenade into the cage, leaving the lion blind and lame.
Now, with some help from the Chinese, the zoo has gotten two new lions, three bears and some other animals. Probably the most striking residents are four pigs, one of which was being treated while we were there.
Some 8 Afghanis were trying to catch the animal with ropes, constantly jumping away when the pig would make an awkward move, scared as they were of the filthy animal.
When standing next to one of the pigs' cage, an Afghan walked up to us: "How do you call this animal?", "Pig". "Is it filthy?" As a matter of fact, it was, being painted half purple and red.

After the zoo, we headed over, once more time, to Babur's gardens, again. Again we missed the cockfight, but we did find an interesting swimming pool-like enclosure. Pleasantly enough, no annoying kids on the grounds of the garden today. We saw plenty of those around town, where our car got washed a total of four times today, although every time I made it clear I didn't want my car washed.
Ah well, the result is always a bit of spectacle, calling each other names while smiling and me ending up giving them 10 to 30 cents anyway.
The last time the car got washed, in front of Chief Burger, I tried to make it absolutely clear I didn't want the car washed. When I came back, the car was completely washed. Wheels, bumpers, sides, windows, the whole deal. Five kids were asking for money and after some words I gave them 10 Afghanis, some 14 cents. But when Raymond, before climbing into the back of the car again, suggested I really should pay more, I took out another 15, in 2 Afghani notes. The crowds went wild.

Related:  Waiting to get back
This text is available under a cc-nc-a license.