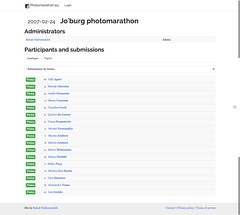 In October 2005, I participated in the Rotterdam photomarathon. I was so extremely charmed by the concept I offered my services to get all the participants’ pictures online.

I was hoping to help organize the contest in 2006, but my moving to Johannesburg put a stop to that.

After moving to South Africa, in 2007, I found sponsors at The Bag Factory specifically to organize Africa’s first photomarathon, the PhotographySA.com photomarathon 2007 :: Johannesburg, which was held on February 24th. The photomarathon ran for 12 hours, starting at 8am.

Later in the same year, through additional sponsorhip deals, I managed to organize the Pretoria photomarathon on September 8th. A spectacular addition to this event was the video category: participants got to shoot video shorts, one minute max, of the 12 themes, a world first.

It took until 2014 for the third South African photomarathon to take place, again in Johannesburg. Photomarathon.eu was used as the platform for submissions management.