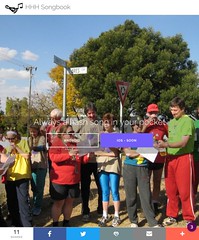 Finally, a mobile app that has all the songs you need when hanging around in a Hash circle.

Available for Android and iOS.

In October 2018, I added persistence of user details between app installs and devices, as well as the ability for users to include and share their own songs. This, after an actual phone call with Apple, discussing some additional functionalities of the app, mostly around policing potential abusive behaviour, resulted in the app also becoming available on the iOS app store.

Based on functionality I built for whereisthenext.beer, in January 2020, registered and logged in users now can get access to a list of nearby places to grab a beer.

In June 2020, I rebuilt the app, making it leaner and faster.

Related:  00qq.com: A day in the life of Flickr