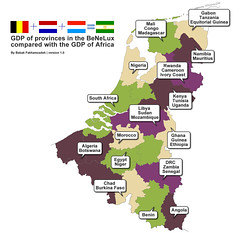 Comparing the GDP of the BeNeLux with that of Africa

It’s been done with the US (map, list), Brazil and China, but I wanted to do this slightly differently.

Economic and social ties between the three countries are still rather strong, particularly between Belgium and the Netherlands. But all three countries are tiny. The Netherlands, with some 16.5 million inhabitants is the largest, followed by Belgium with nearly 11 million and Luxemburg with just half a million.
However, economically, notwithstanding the current downturn, all three countries have been prospering for a while, roughly starting at the beginning of the 17th century with the Dutch Golden Age, when the low countries become one of the reigning colonial powers.

Basket case Africa (am I ruffling feathers yet?) is of course a very different story. Why exactly Africa has been lapped, several times, since the 1960s, when most African countries gained independence, by the economic developments of the south east Asian countries is no topic of this post, but the fact remains.
In fact, the size of the African economy is puny, laughable even, compared to the rest of the world and considering its size.

So, with a combined population of about a billion people, Africa creates about as much value as some 27 million people in a tiny corner of the north east of Europe.

Note that for exchanging the BeNeLux’ GDP from euros to dollars, I used the exchange rate for the last day of 2009. With the tiny increase in GDP for Holland for 2009 and the fluctuations of the exchange rate during the year, it’s very likely that, at some point, the 2% difference between the GDPs of Africa and the BeNeLux occasionally evaporated, perhaps even making the GDP of these three countries occasionally bigger than the GDP of the whole of Africa.