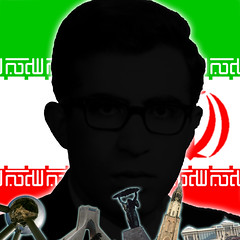 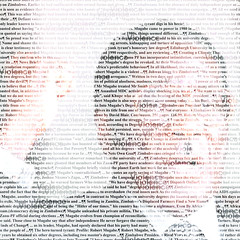 3 heads are better than 1: Violence 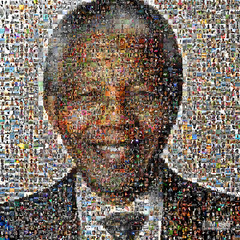 3 heads are better than 1: MYdiba

Although I’ve been ‘put to work’, during my residency at The Bag Factory as a photographer, I’ve been experimenting with a few other things as well. The series below is one of the results of that experimenting.

This series, and some other work, including actual photographs (yeah!) and possibly a collaborated video work (with Ismail Farouk), will be on display at The Bag Factory from May 23rd 2007. Come and buy! You know you want to.

A mosaic made of photographs from Flickr, all tagged with portrait and Africa. The resulting image is released under a Creative Commons license and available at Flickr. You can make your own prints based on the large image available through Flickr.

An image of Robert Mugabe, overlaid with texts from newspaper articles from the last ten years or so. All quoted articles have some reference to his oft quoted remark that he holds “Degrees in violence”, besides his many academic degrees. The image can be seen on Flickr in more detail.

Iranian flag, a very darkened image of my father, and highlights of some of the cities I lived in over the years. You figure it out.

This work is available under a Creative Commons license. You can make your own print from the large file available on Flickr.