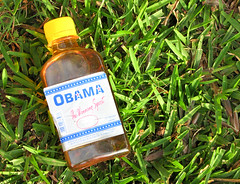 You probably can think of a multitude of reasons why not to drink beer. By far the best can only be whisk(e)y.” The site tracks votes for different brands of whisky. At the end of each month, the votes are tallied and the current months top ten is updated on the website. It is possible to by a t-shirt with this months top ten of whiskys.

The site uses an external cgi-script for tracking the votes and is, besides that part, static HTML.