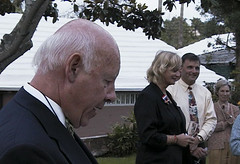 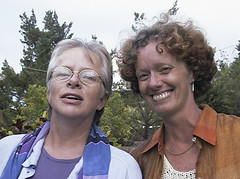 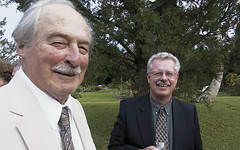 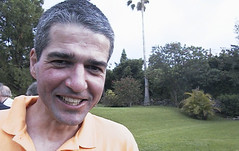 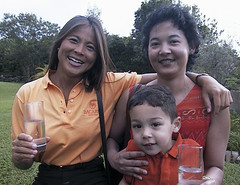 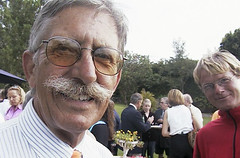 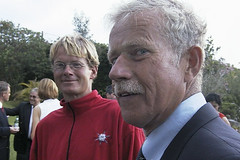 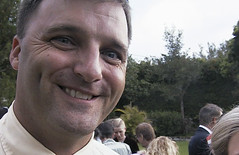 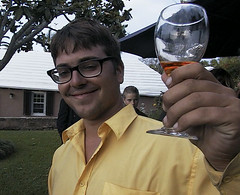 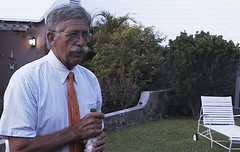 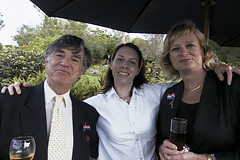 The spirit of togetherness 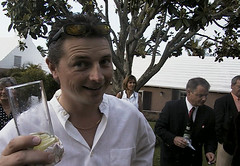 It's always fun to be abroad when something important is happening in relation to the Dutch nation. On the 30th of April, the queen's birthday is celebrated. Not that it actually is her birthday, but hey, who cares. In the Netherlands, the "summer" season generally starts on the 30th of April and abroad, the consulates and embassies all throw parties for the Dutch who are around. We managed to convince the honorary consul to the Netherlands in inviting us to his wonderful home. Mr. Mulder's private garden was the size of a soccer field, but hilly, and covered with small trees and bushes and overlooking a bay on the northern side of the island. The house was huge and on three levels. In short, Mr. Mulder didn't do all that bad. Some sixty people were at the party, of which about forty were Dutchies. By far the best parts were the food and drinks. Typical Dutch fare, such as raw herring and eel and oranjebitter a truly terrible schnapps of orange flavor. The orange, of course, in reference to the royal Dutch color.

Afterwards, we joined a Dutch guy who had been living in Bermuda for six years on a night on the town, Hamilton that is, the capital of Bermuda. We had quite a bit of fun but since we already had been drinking since the early hours of the day, we very quickly became dead drunk. Jim had to empty his stomach at the yachting club, in-between two songs, on the dance floor, I emptied my stomach from the taxicab window on the way back. It was a good evening.

Related:  In preparation for the journey east
This text is available under a cc-nc-a license.