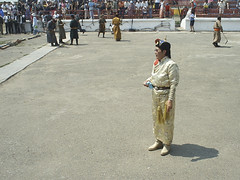 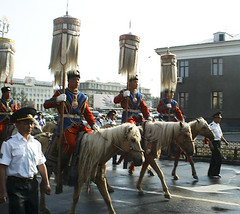 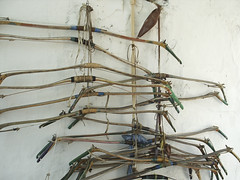 Bows and arrows against the lightning 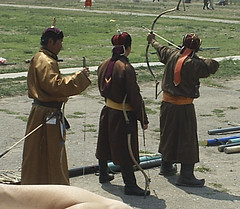 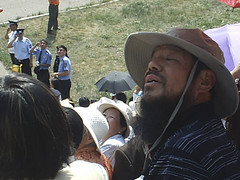 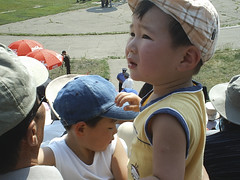 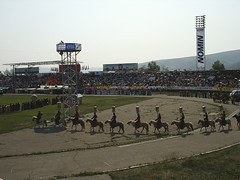 Walking in with the banners 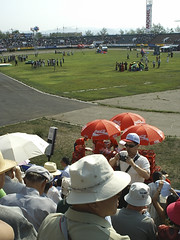 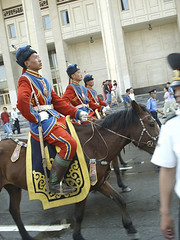 Last weekend, UB came to life as the stage of the country's most spectacular festival: Naadam. It's full name being the 'Manly three sports', it puts the country commercially to a standstill for a good three days.
The three manly sports are wrestling, archery and horse racing, although only young kids feature in the horse races where, depending on the age of the horse, distances of up to 45km are covered. Never do all horses come back with their riders and occasionally, one of the small riders gets trampled underfoot and dies.
In previous years, the horse races were held just outside UB, near the airport. This time, they were located a good 40km out of town and since virtually everyone in UB goes to see the races, it was nearly impossible to drive there. Standing at the finish line, we saw the finish of the 5 year old steeds.
One of the 400 riders in the 5-year old (horse) race, a boy was whipping his horse to beat his nearest competitors. After the boy finished, like all jockeys dressed in full Mongolian regalia, he got of his horse, the horse shuddered, fell down and died.

Only two days before Naadam, the streets of UB had come alive with tourists. Hordes and hordes of tourists. In a way, I felt happy for SARS because normally, during Naadam, tourists almost outstrip locals.
Not that, as a whole, Naadam is that spectacular. All in all, the event can be compared to any reasonable fair or sports event anywhere else in the world. It's uniqueness coming from the types of activities. Not only the three manly sports, but also ankle bone shooting, throat singing, fortune telling (with ankle bones) and more can be seen. Mongolians coming to UB from all over the country.

Related:  A run around

On Friday morning, the official part of the festivities started with a group of Mongolians on horseback picking up the 9 white (signifying peace) Mongolian standards from the parliament house and carrying them towards the stadium for the opening ceremony. The group of Mongolians, walking in unison, holding the standards and dressed in what to me looked like battle-dress, gave me an insight into the freight these people must have incurred in their enemies when conquering Asia under Chinggis Khan.

Saturday night, we did a hash pubcrawl. Visiting four bars and a disco, drinking beer and vodka, we had the most crazy time scaring the hell out of locals and tourists who happened to be in the same bars at the same time. For good measure, we ended up around a campfire next to the Tuul river, drinking vodka with a bunch of Mongolians, hanging around to see the sun rise.