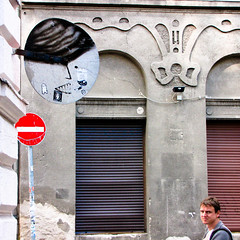 That head of hair looks familiar 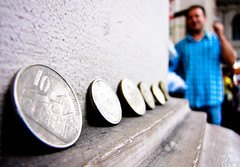 My last two nights in Budapest were surprisingly fresh. August in the capital of Hungary should be toasty. Not so, even to the extend where i was almost freezing my ass off, sitting outside at BarLadino Saturday night (which gives a free beer to the FourSquare mayor for BarLadino every day).

During the day, Benno and i lounged at muzeum cukrazda, followed by a visit to the National museum itself. An exhibition on historical treasures contained the cloak worn by St. Stephen at his coronation over 1000 years ago, while what I found was the most interesting bit was a series of photos from Budapest in the 1920s and 30s.

Some of the exhibitions were bilingual, some weren’t. And some that were had explanations in English that were wrought with spelling and grammar errors. It made me aware of a much more holistic method for providing information to museum patrons.
The museum could install a restricted wifi network, so that visitors with smart phones and other portable devices would be able to access information on any object in their language of choice. This could be done by typing in the object number, for example, but also through the use of QR codes, for those devices that have a camera.
The beauty of this is, of course, that the descriptions will always be up to date. Also, these descriptions could be made part of an online version of the museum’s collection, opening up a museum’s collection to the world. And, through automatic online translation services, the texts will be available, to some extent, in all common languages of the world.
With the proliferation of smart phones and now the introduction of the iPad, soon to be followed by the introduction of the android tablet, this will be the way to go for museums to satisfy their customers.
What’s even more special about this solution is that it allows the museum to build an interactive connected web of it’s objects, suitable for visitors to follow a trail on the subjects of their choosing and liking.

Related:  I like Kiev in October, how about you?

We went to bed early. Benno and Marleen were going to drop me off at the airport. We had to getup at 4 in the morning.