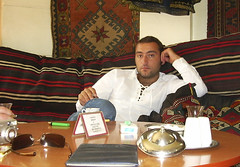 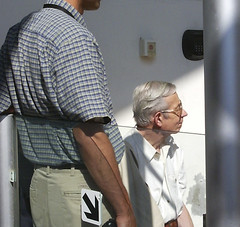 Taking the train from Drama to Istanbul, after having the take a bus from Kavala to Drama, the Greek countryside reminded me of Bulgaria, but also of Mongolia; sometimes rocky hills, sometimes barren rolling hills in the distance.

In the tiny border town of Pythio, in Greece, we had to wait some two hours for the Turkish train which would take us to Istanbul. The only travelers seemed to be mainly Spanish tourists. I had a good laugh when an American tourist had to pay 100 euros for a visa. We had to pay 10, although some people didn’t have to pay anything, coming from the right countries.

In Istanbul, we ended up a cheap hostel, which was run by a very good English speaking Turk.The hostel was located right next to the Sultanahmed mosque, which meant being woken up early in the morning by the muezzin’s first calls to prayer.
Istanbul is beautiful: the mosques, the many parks, the Bosporus, the Golden Horn, the restaurants and the bars, although to my surprise many didn’t serve any alcoholic beverages. Luckily enough, they all served nargileh, water pipe.

Related:  We be hangin’
This text is available under a cc-nc-a license.