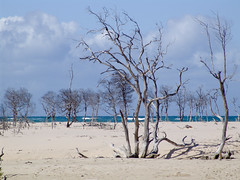 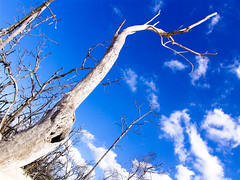 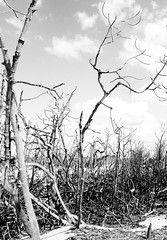 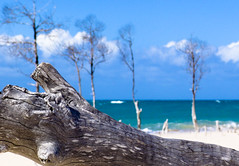 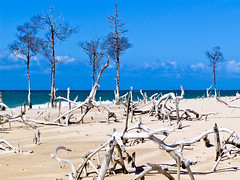 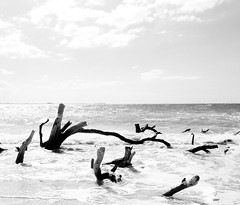 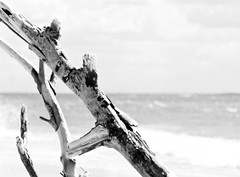 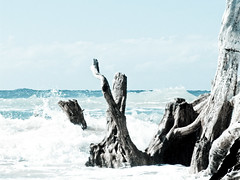 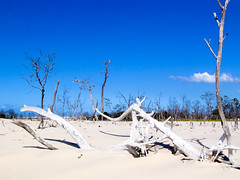 We took John's aging bakkie today to drive towards Bartholomeus Diaz, land's end on a sliver of land, slightly north of Inhassoro. During the all-encompassing floods, some years ago, most of it had slid into the sea, and now nothing much but dead trees and the occasional brackish pool remain. It makes for outstanding scenery, though.
Here, in one of the pools, besides a barracuda, John also found a puffer fish. Flapping his fins like crazy, the small bugger seemed to be holding his breath to blow up. He was cute.

Driving, we also came upon a dead turtle, partially covered in sand. Apparently, line fishers just cut of the head when they catch one, preferring fish to turtle.
We also came across several groups of blacks, doing what appeared to be digging for shells. Whenever we came close, they ran off screaming.

John and Semia are set to get married early next year. He's a Zimbo but now living in Mozambique, running the lodge we stayed at; she's half German, half Tunisian and a real city girl. While John never wears shoes in Inhassoro, she uses a tissue to hold a sandwhich while munching it. Driving back to the lodge today, John behind the wheel, he was almost continuously looking out the windows in search for wildlife, birds, particular shrubs and more: 'Look at that bird…', 'Do you see that shrub…'.
It's not so hard to see that these two are going to get into a struggle at some point.

Related:  Playing it again, and again, and…
This text is available under a cc-nc-a license.