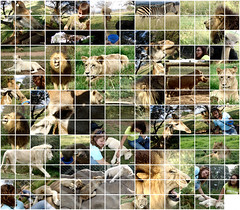 We almost got stuck at home for days when we forgot to turn the lights out when parking outside Montecasino, two days ago. Leaving the place, we couldn’t start the car. I tried pushing it, with Betsy trying to start the running car, but it seems that automatic cars don’t respond well to this approach. Asking around, we couldn’t find anyone with jumper cables. We left the car in the parking lot and walked home. Don’t worry, it’s only a one minute walk. Betsy tried contacting the AA, that is, the garage whom she’s renting the car from, but no luck. In fact, it was only two days later that we finally were called back. A bit late indeed.
The next morning, we walked down to the car, to decide what to do next. To our surprise, the car started and we drove of.

Yesterday, with the miraculously revived car, we visited the Sterkfontein caves, where one of the oldest hominid archaeological finds took place. You get a cave tour, which is similar to any cave tour anywhere, but the museum is reasonable enough to warrant a small visit. The archaeological find itself, a hominid skeleton some 4 million years old, is still mostly encased in rock. You only get to see it on a flat LCD screen.

Today, we teamed up with four guys from Betsy her work and visited the Lion Park. The Lonely Planet warns for large groups of braaiing Afrikaners, but it wasn’t all bad. We had to struggle to get in, while making sure a giraffe wasn’t going to leave the premises. Then, we had the opportunity to cuddle up with some lion cubs. Next was a feeding session with giraffes and ostriches, a terribly hilarious episode, after which we went on a self-drive safari through the lion park itself, which was nothing short of amazing.
Two years ago, we visited a small lion park on the outskirts of Harare, where we also got to cuddle some lion cubs. The cuddling, there, was more spectacular, mostly because those cubs were younger, meaning you could really pick them up and treat them like big cats. However, here, the lion park, packed with the kings of the jungle, was much more spectacular. Not only were there many more roaming around, they walked within centimetres of the car, with one even rubbing his body against the car and biting the headlights.

Finishing up in what’s becoming our local, the Keg and Minstrel.