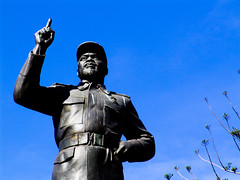 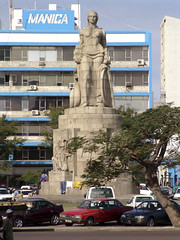 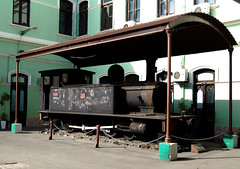 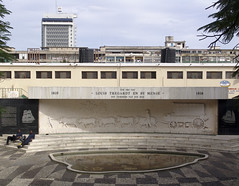 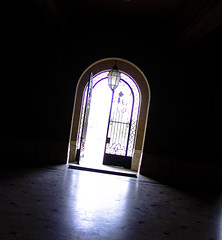 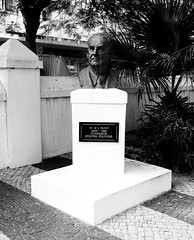 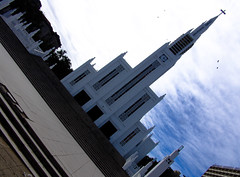 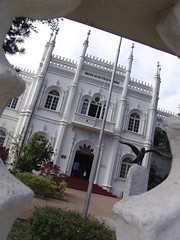 Taking it easy, we walked around the rather rundown town, taking in the couple of sights the city has to offer. We stopped at the national gallery and, in the garden, were asked by Marcos Muthewuye to 'Cultuvate Your Ideas'. We had to make a drawing of something, anything, that would be planted in the garden, to see if it would 'grow'. We used one A4 paper, made a diagonal line on it and on one side drew a picture of Holland and on the other a picture of Mozambique.

We also stumbled upon the very well kept monument to Louis Trichard, a boer voortrekker who crossed the jungle from South Africa to end up in Maputo. Shortly after his arrival, everyone who had survived the journey had died from diseases.

The city's train station was a bit of a farce, similar to the one in Beira which we would see a couple of days later. The station is kept very clean and reasonably fresh signs from the national rail transporter claim that they should build on the experiences of the past and use the country's rail network to its full potential. In fact, the only train running in Mozambique only occasionally makes its way between Maputo and Nelspruit.
The track going north from Maputo to Inhambane is still there, but almost completely covered in dirt, sand, or plots where locals are cultivating crops.

At Fatima's, the guest room is actually the inner courtyard of the hostel, with an outdoor kitchen and pop music played way too loud. In the evening, Betsy and I were talking to a lady from Pemba, all the way up north in Mozambique, about local arts and crafts, when screams came from the kitchen area. One of the guests was trying to cook a lobster and the lobster had decided to take off, jumping out of the pan, on the table, on the floor.

Related:  Yet another visa run
This text is available under a cc-nc-a license.