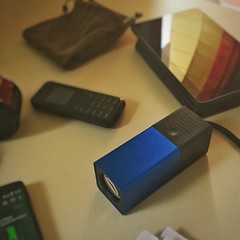 What if, after you’ve taken a photo, you would still be able to change the focus or even the perspective? Lytro cameras do just that.
Back in early 2012, Lytro shipped their first light-field camera. Quirky for its shape, basically, a small brick, the camera got rave reviews for its functionality, although pretty much everyone agreed that being able to change focus and perspective after shooting images, was mostly just a gimmick.

In April 2014, Lytro released their second generation camera, the ILLUM (named after what? A Danish department store? A planet in the Star Wars universe? The Maltese for today?). Using higher-end hardware, this camera shipped for a cool 1300USD. Their first generation camera understandably dropped in price, so, when a friend went back to visit his family in the US, I took the opportunity to order their first generation camera for a mere 79USD. Off Amazon. In November last year.
A surprise addition was that Amazon threw in a year of free cloud storage, worth some 60USD, meaning the real cost of the camera ended up being rather small.

But, you get what you pay for.

The camera comes with a magnetic lens cap. Cool, but easy to lose. Which I did after only a few days.
Also, the camera wouldn’t charge. An elaborate series of hardware resets solved that problem, but then came the real challenge.

Transferring photos from camera to computer is done with proprietary software. The latest version of this software, simply called Desktop 5, is only available for Windows. The previous version, Desktop 4, does not run on a four year old MacBook Air (which is what I have and which was the latest at the time this camera was released by Lytro). The version before that, Desktop 3, doesn’t run on anything after OS X 10.9, which came out over two years ago.
So, the only way to get the images from the camera onto your computer, and what Lytro advises you to do, is to partition your internal hard disk, or get an external hard drive, install OS X 10.9 and then install Desktop 3. Painfully cumbersome.

Related:  The days of our lives

To upload from Desktop 3 to the web, that is, the Lytro website, you need to log in, obviously. I signed up with my Facebook account. However, logging in with Facebook, through Desktop 3 fails. So, I had to elaborately circumvent this, resetting a non-existent password to something that allowed me to sign in without using Facebook.
But then, the upload.
Seemingly working fine, after uploading, processing of the uploaded images on the Lytro website never finishes. After uploading 10 photos and waiting 8 hours, the website still told me it needed another 10 hours to process the uploads.

It went downhill from there.

I notified Lytro support of the issues I was having trying to share my photos with the world. But, after three months of dragging their heels, Lytro finally admitted that they would no longer support Desktop 3, meaning that my only options are to either invite the world to my computer to see my photos, or to buy a new MacBook. Both rather disproportionate solutions to the problem at hand.

But, there’s a workaround. Or so I thought. Lytro also makes a mobile app for iOS. The Lytro camera can set up a local wifi network allowing you to transfer your photos from camera to app and then, after switching back to your regular wifi network, upload your images to the web.
However, using the Lytro app, only smaller versions of your photos actually get uploaded, but, worse, Lytro also came out a few months ago, saying that mobile support for their first generation camera (that is, my camera) will end soon.

After successfully moving my first batch of photos from my camera to my computer (using a partitioned instlal of OSX 10.9), assuming I would be able to upload them to the Lytro website, I effectively have lost access to those photos, as there is no way to get them out of the now unsupported software they reside in.
So, I tried my luck with a second batch of photos that had been waiting around, on my camera, since our trip into the Amazon, last December. The app is horribly slow, but, I was able to select the images I wanted to upload. And, lo, they uploaded.
Or so I thought. Though all photos I selected were said to have uploaded, my online Lytro account only lists one. Checking progress of my uploads from within the Lytro website shows my other uploads still requiring processing, in exactly the same way as when I tried uploading images through the Desktop software.

Here’s the only one image I’ve been able to upload so far.

So, yeah, you get what you pay for. And, as Lytro’s hardware might be ok, it’s their software which is the problem, meaning that the exact same problems might arise with their 1300 USD flag ship camera. Do. Not. Buy.

As an aside, it turns out that Lytro made the decision last year to shift away from selling consumer cameras. It’s a pity they still want to milk the market for what it’s worth. Perhaps their hardware is good, but the software, without which it’s impossible to use the camera in practice, is shit.

As another aside, the company through which I bought the camera, The Restored Store (they sell through Amazon), has been stellar at dealing with my order.