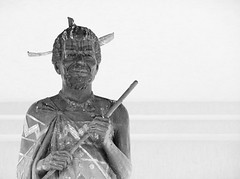 It’s surprising to find that both in Lesotho and Swaziland (and, as we found out later, in Mozambique too) there isn’t some apartheid ghost looming above everything you see or do. It makes for rather more carefree conversations with the locals, without the implicit and underlying blame, so prevalent in South Africa and Zimbabwe.
Also, things were surprisingly well organized in Swaziland. Upon leaving the country, we were even asked to complete a survey with a girl interviewing tourists on their experiences inside the country.

Unfortunately, we missed one of the two big yearly events only by a couple of days. In the yearly reed dance, hundreds of young girls dance before the king, for him to choose yet another wife. Next Saturday, not the girls, but their mothers would dance before the king. I admit it, not as spectacular, but still…
We did experience some of the five day preparations, where the mothers first congregate, close to the queen-mother’s residence, before collecting the reed.

First, we had heard the dance would take place today. Struggling to find the country’s tourist office, tucked away in some mall in Mbabane, we asked the very friendly guy on duty for more information, saying we had heard the dance would be performed today. He replied: “But I don’t understand, the king is not in the country.” And he wasn’t; this very morning, he had left for an AU summit.
The country seems to revere the previous king, Sobhuza II, who more or less saved the country from annexation by the British, early in the last century, and pulled his peoples together as one. We visited his memorial but weren’t allowed to take pictures of his grave.

I had read about the king leaving the country in The Times of Swaziland, which resembles a small village bi-weekly newspaper, with the ads and the listings of people changing their name because their new name was their ‘natural’ name.

We headed out of the country, making sure we would arrive in South Africa before the border closed, to drive to Nelspruit, where we would drop off our rental the very next morning. Next stop would be Mozambique.