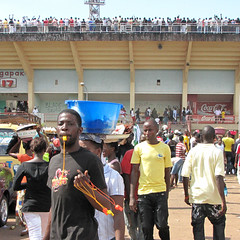 Getting to the stadium 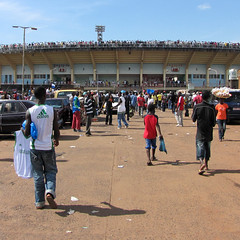 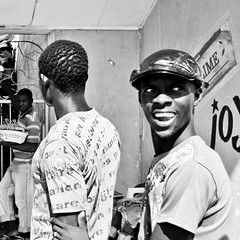 Happy to be at the match 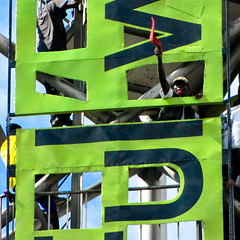 The South African newspaper Business Day has a lovely article on that countries soccer team's trip to Freetown to play a qualifier for the African Cup of Nations against Sierra Leone, last Sunday. Niamh had been wanting to see a soccer match, here, for a while, so I figured this would be the best and, really, only, reasonable opportunity, to see a match of any quality. We got tickets through a colleague of Niamh's and went with half a dozen or so to see the match. The same match Mninawa Ntloko talks about in said article.

Ntloko being South African and his paper's sports editor, would be expected to be familiar with more typical African hardships, but even he, as he documents in the article, was horrified by both the exasperating journey to get here, the struggle to get from the airport to town, and the quality of the Bintumani hotel, one of the better ones in town (though that's very relative) which they were put up in.
Even though he uses a bit too much hyperbole, the article captures what it's like, for an outsider to arrive in Sierra Leone, quite well.

We didn't get to see the match. Even though tickets were sold at a premium, and ours, not even the most expensive, cost what, on average, a Sierra Leonean has available to spend every 10 days, for the 42000 or so seats, a neat 60000 tickets had actually been sold. We arrived around 3pm for the match which was to start at 430. Already then, the stadium was so packed that it was literally impossible to get onto the stands. People were climbing the light towers surrounding the stadium and trying to get in through the basement, occasionally being beaten off by soldiers using their belts to lash out.

Deciding to abandon the match, we went home in the hope we'd be able to catch the match on television. Not so, and not even SABC aired the match.

The field, pot holes filled with stand, is part of a stadium that has been banned by FIFA several times and they warned the national sports authority that overselling of tickets would result in a ban for the Sierra Leonean team. I doubt it but we will see.
The game ended in a draw, which Ntloko thankfully welcomed. His opinion seems to be the consensus, with other reporters thinking the same.
Bafana currently hold the top spot in their pool.